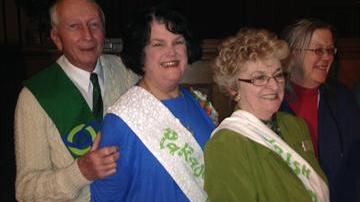 The annual downtown St. Patrick's Parade grand marshals are Mike and Mary Moze who have contributed 40 years of volunteerism to bring authentic Irish activities to the community.

Irishman of the Year is Thomas Patrick McAleese who parade fans might recognize. For years he's played St. Patrick. McAleese was brought to near tears as he recalled that his Irish ancestors were looking down on him and would be so proud.

The 2014 Irish Rose is Julie Smith whose family came from Ireland and settled in Wisconsin around the time of the famine.

\"We have so much to be proud of and the quality of life we have contributed to the city,\" Smith told CBS 58 News.

Saturday March 15th has a variety of events for the family.

It begins at 8:30 a.m. with mass at St Patrick's Church at 7th and Washington. There will be readings in both the English and Irish language.

An authentic Irish breakfast will be served at the Irish Cultural Heritage Center on Wisconsin near 20th right after the mass.

The parade kicks off at noon at third and Wisconsin.

Then you can see your favorite acts at the parade up close at the original Post Parade Party again at the ICHC.

There will be several stages of entertainment and story telling for the children, as well as food and drink.