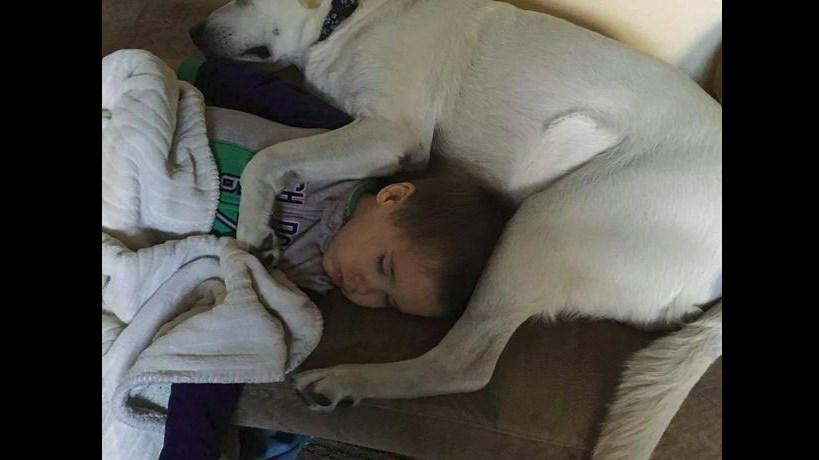 (CBSNews) Shortly after turning two, Tupper Dunlop was diagnosed with autism spectrum disorder. But his parents noticed something was wrong when he was just an infant. Not only would the little boy not make eye contact or respond to his name, his response to sound seemed skewed. So, he would often react dramatically to the slightest of sounds and not at all to very loud ones.

There was also the sleeping... or rather, lack thereof. Tupper was incapable of sleeping more than 45 minutes at a stretch, or more than 3-6 hours a night. He would simply grow too restless... tossing and turning... crying in his sleep... even thrashing around. And until December of last year, he was nonverbal, so he couldn’t even articulate the discomfort he was in.

“As parents, having a child who didn’t sleep or slept very minimally, it was physically and emotionally draining,” Tupper’s mother, Nancy Dunlop told CBS News. “Having a child cry, scream or appear to be in some form of discomfort, pain or stress, who can’t tell you what is wrong is very difficult. You feel very helpless, not knowing what to do to help your child.”

Then, last year, Nancy and her husband made a decision that helped Tupper more than words can describe. The Winnipeg, Canada, couple got him an autism service dog... a two-and-a-half-year-old yellow Labrador, named Lego.

“The idea of a service dog for Tupper came from his love of animals,” explains Dunlop. “We had a friend come over with her dog and Tupper engaged with him, playing fetch and chase, and was very happy and excited, laughing and squealing. This reinforced the fact that an animal might be a good support for Tupper and might encourage him to engage with others.”

Boy were they right.

Since working with Lego, Tupper has become more calm and very verbal. He can now go to the mall, the grocery store and on family walks without having to be carried or buckled into a stroller.

“We used to have to fight with him constantly to hold our hands,” explains Dunlop of her son. “Now, he is most often willing to hold the handle on Lego’s vest and walk with us.”

And the bedtime issues? They’re all but gone. Where it used to take Tupper’s parents between one and two hours to put him to bed, it now takes them only 15-30 minutes. And Lego sleeps right next to his little boy, cuddling up tight, to protect him from those big, bad nightmares. As a result, Tupper now sleeps between eight and ten hours a night.

“Lego has a great calming effect on Tupper and provides a companionship for when he needs to regulate himself,” explains Dunlop. “He’s being trained to help corral Tupper when he bolts. And he will engage Tupper by bumping into him or bringing him a toy to initiate play when Tupper is upset or overwhelmed.”

The bond between Tupper and Lego is still quite young, maturing with each passing day as they learn to meet each other’s needs. But one thing is already quite clear: The little boy and his service dog were meant to be together.