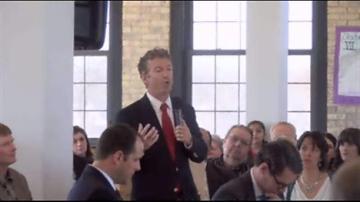 The group \"LIBRE\" also helped put together the forum which in addition to Rand featured a variety of experts including Dr. Howard Fuller, Professor of Education and Director of the Institute for the Transformation of Learning at Marquette University and Mr. Zeus Rodriguez, president of St. Anthony.

When it came to the issue of vouchers, Paul said he didn't come to Wisconsin to tell people how to do it, he came to learn how the state is doing it.

It's been decades since Wisconsin passed the first voucher system in the country which allows state funding for private education.

\"When you pay your taxes,\" Paul said, \"is it your money? Or is it completely the government's money.\"

Many Hispanic groups were part of the forum, but a leading Hispanic voice in state government who is also a former student at St. Anthony took issue with the visit because of Rand's voting record and past statements about immigration reform.

\"We need allies to come into the Latino community and speak with our families,\" explained Milwaukee Democrat Jocasta Zamarripa, \"not folks who are calling for the removal of our citizen children.\"

Zamarripa said she supports the St. Anthony's community but asked them to consider Rand's \"radical viewpoints.\"

I would like to make it known that I spoke with many of the people who were upset at his visit and told them that we understand their frustration and that we do not blame them for their passion or their objection. I did however discuss with them that it is our philosophy to engage influential leaders who are moving in the right direction on the issue of immigration. We would never defend previous statements and initiatives promoted by Senator Paul regarding immigration. But we do feel that he has made a concerted effort to engage and listen to other points of view and has shown willingness to evolve on the issue. He recently spoke with the Hispanic Chamber of Commerce and was praised last year by Congressman Luiz Gutierrez for moving towards a reasonable solution. Senator Paul may have a long way to go but unlike Mitt Romney, who was moving in the wrong direction in 2012, Senator Paul is not.

This event was not about immigration it was about school choice. School choice is extremely important to the welfare of many in our community and we are confident that it will give us a larger voice with the Senator on the issue of immigration should the time come.

We are committed to working with all members of the Latino community to make sure all our leaders understand our issues and work towards a fair solution to all issues concerning our Latino community.