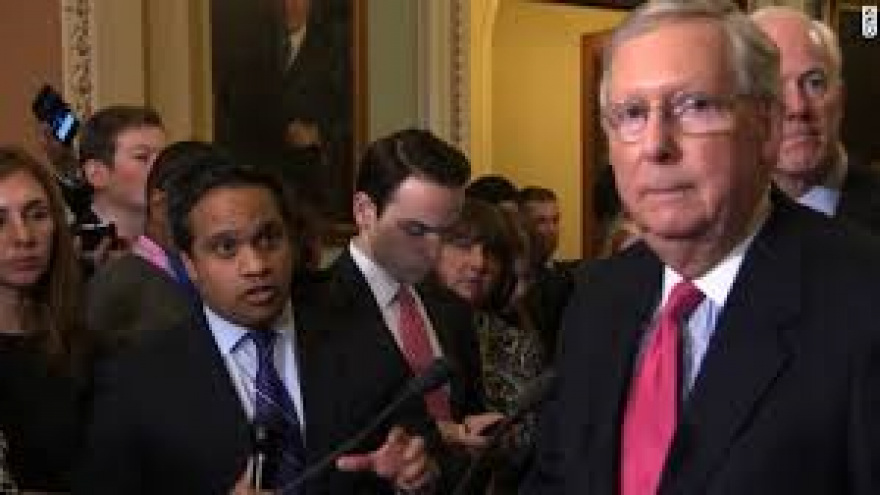 (AP) Senate Republicans have released a 142-page draft of their bill to eliminate much of the Obama health care law.

The measure would cut and revamp Medicaid, the health care program for lower-income and disabled people.

It would repeal tax increases Obama's law imposed on higher-income people and medical industry companies to pay for expanded coverage. And it would end the tax penalty Obama's statute imposes on people who don't buy insurance — in effect, ending the so-called individual mandate.

Majority Leader Mitch McConnell is hoping to push the measure through the Senate next week. But its fate remains uncertain.

It faces uniform Democratic opposition. And at least a half-dozen Republicans — both conservatives and moderates — have complained about it.

Wisconsin Senator Ron Johnson says he will vote no on the bill in its current form. Sen. Johnson is joined by Republican Senators Ted Cruz, Mike Lee and Rand Paul. The four Senators released the following statement:

“Currently, for a variety of reasons, we are not ready to vote for this bill, but we are open to negotiation and obtaining more information before it is brought to the floor. There are provisions in this draft that represent an improvement to our current health care system but it does not appear this draft as written will accomplish the most important promise that we made to Americans: to repeal Obamacare and lower their health care costs.”

“This issue is very personal to me because when I was young, I had a childhood illness and was branded as a child with a pre-existing condition. This is also very personal to the people of Wisconsin, and tonight families will lay awake wondering if the health care they have today will be there tomorrow.

“For Wisconsin families struggling to get ahead, this repeal plan has no heart and people are scared that it will make things worse. It will make families pay more for less care and increase the number of people who are uninsured. The guaranteed protections and care that you have today are weakened and now, politicians in Madison will decide whether you keep the care you have, or whether it is taken away.

“If you are older, you could pay an age tax. If you have a pre-existing condition or struggle with a sickness, you could be thrown into a high-cost pool that prices your family out of your health insurance. This repeal plan cuts and caps Medicaid, putting care at risk for everyone who depends on it—from a loved one who depends on Medicaid for nursing home care to a disabled child who relies on Medicaid funding at school.

“The people of Wisconsin did not send me to Washington to take people’s health care away. I am going to fight to protect the health care people have today and I will continue my work to make it more affordable, not more costly.”