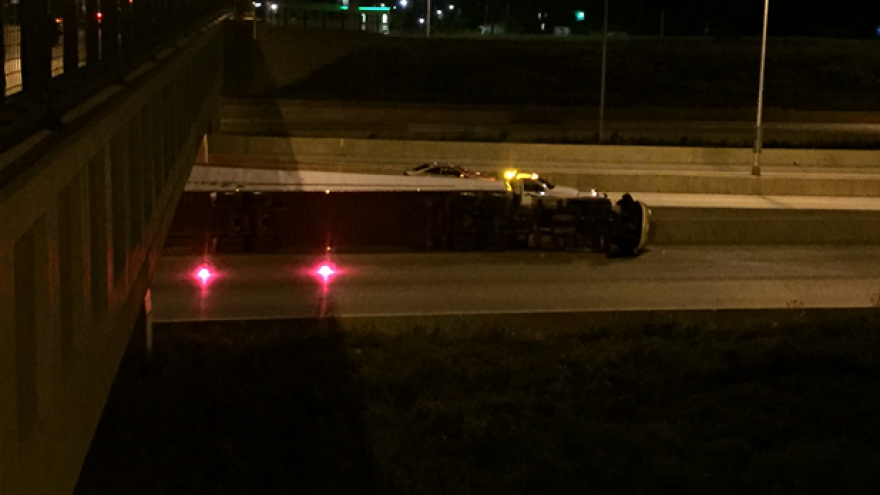 A portion of the Mitchell interchange was closed for nearly five hours this morning due to an overturned semi-trailer truck.   A semi loaded with 45,000 pounds of brake parts overturned, blocking the two left lanes of in the east bound system ramp of I-894 to south bound I-94 just before 1 AM today.  According  to the Milwaukee County Sheriff’s Office, the load apparently shifted as the driver entered the ramp.   The semi tipped onto its left side and the Greenfield Fire Department responded to extricate the  driver, but he was able to get out himself before the firefighters arrived.  The driver was taken to a local hospital for evaluation.  The MSCO said that due to the amount of equipment needed to remove the semi from median barrier, the full freeway was closed until about 6 AM.  The driver of the semi was cited for Unreasonable and Imprudent Speed.

UPDATE:  The system ramp at the Mitchell interchange is now open to traffic.   Debris from the early morning semi-trailer truck accident has been removed and traffic was restored just after 6 AM.

The I-894/43 eastbound system ramp to the southbound I-94 is closed this morning due to semi-trailer truck crash.   The accident happened shortly before 1 AM Tuesday morning.    A single semi-trailer truck tipped over onto its left side, blocking two left lanes of the freeway.   There are no reports of injuries due to the accident.   The full freeway is now closed as heavy lift tow trucks work tip the semi upright and clear the highway.     Traffic should exit I-894 eastbound at 27th Street, go south onf 27th Street to College Avenue, east on College Avenue where it can rejoin I-94.