Second anniversary of mass shooting at Sikh Temple of Wisconsin 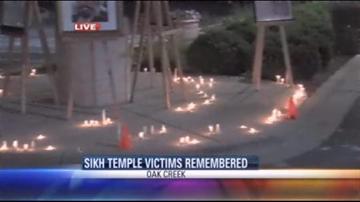 OAK CREEK-Two years ago Tuesday, we learned the horrible truth.

A white supremacist interrupted the afternoon peace of the Sikh Temple of Wisconsin and fired at will.

The temple president was among the dead. He had tried to fight off the gunman with a ceremonial knife.

Days later we would see the food closet where children hid. A single bullet left as a reminder in a door frame.

The gunman took his own life rather than get arrested.

The anxiety and fear extended to the suspect's Cudahy neighborhood where a search of his apartment dragged on for hours. Neighbors were told to stay away for fear it might be booby trapped.

A community with no true understanding of why this happened was certain in the goal of making sure those with ill intent would not triumph.