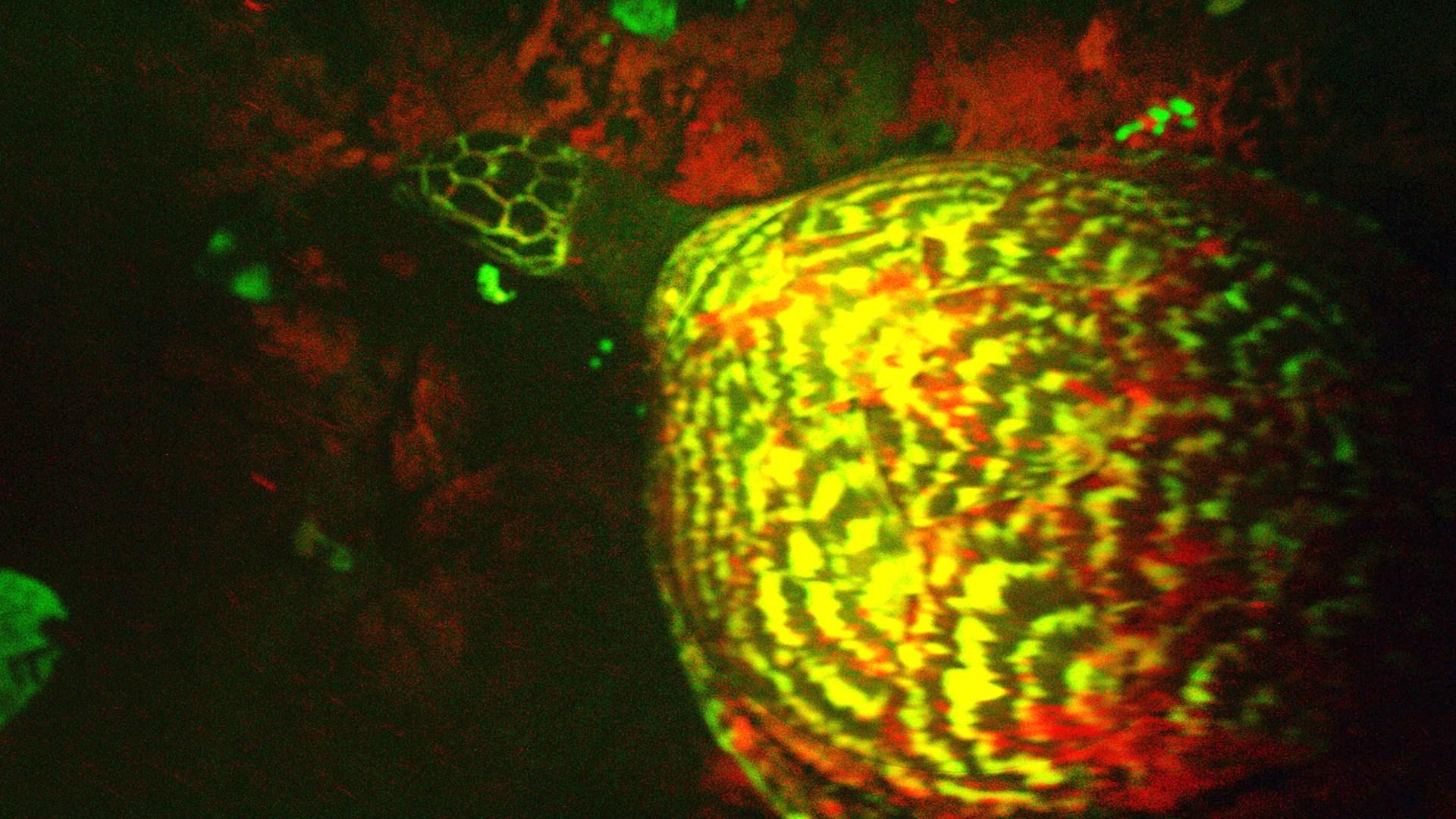 That's not a "Teenage Mutant Ninja Turtle" floating before your eyes. You're seeing the first biofluorescent reptile discovered by scientists.

While filming small sharks and coral reefs in the Solomon Islands in the South Pacific, marine biologists had a stunning encounter with a "glowing" sea turtle.

Scientists captured footage of a hawkbill sea turtle emitting neon green and red light. The discovery was made in late July by David Gruber of the City University of New York and his team. The footage was released for the first time on Monday.

Gruber, an emerging explorer for National Geographic, described the turtle as an alien spaceship when he initially saw it swimming in the water.

"It was absolutely gorgeous," Gruber said in an interview with CNN. The turtle swam into the team's lights while they were filming coral underwater. The turtle's appearance was unexpected and took everyone by surprise, he said.

In just a few years, scientists have started to pay more attention to biofluorescence in marine species.

Fluorescence has helped provide a marker for scientists to see the inner workings of cells and that has partially lead to an explosion in research in the biofluorescence field, Gruber explained.

Finding a reptile that exhibits biofluorescence opens up a new set of questions: Why is a turtle emitting light? What is the chemical composition?

Unlike bioluminescence, which is when an organism produces its own light through chemical reactions, such as what fireflies do, biofluorescence is when an animal absorbs light, transforms it and radiates it, sometimes in different colors.

Scientists have discovered the presence of biofluorescence in corals; arthropods such as crabs and insects; and more than 200 species of sharks and fishes.

In certain cases, scientists have an idea as to how organisms use biofluorescence. In coral living in sun-drenched parts of the ocean, for example, biofluorescence functions as a form of sunscreen. It also can work as a lure as well. Early studies suggest some fish use biofluorescence as a way to signal to one another.

"For fish and sharks and now turtles, it's much more mysterious," Gruber said.

Typically biofluorescence is used to attract prey and is used as a form of defense. The neon lights may help with camouflaging the turtle. But Gruber explained that it may be too early to understand why the turtle radiates these lights.

"The ocean is the perfect place to evolve these kinds of fluorescent molecules because it is almost completely blue," he said. "The ocean absorbs almost every other color except for blue -- so these animals have been creating ways to take in that blue light and transform into other colors," he said.

Scientists are just starting to understand the process. "This is just another example showing how many mysteries the ocean has in store for us," he said.

However, the hawksbill turtle is critically endangered and the species is threatened because of climate change. In some areas, there are only several thousand breeding females left.

"Their numbers have really dwindled, and yet we still don't understand them. For me, there's a sense of urgency to protect and understand these species while they are still here," he said.