Currently all storms are below severe limits in southeast Wisconsin, but a few stronger cells could produce wind gusts of 35-40 mph for the next hour or so. Main concern at this point is the moderate to heavy rain occurring in these storms. The strongest cells have been producing 1-2" of rain an hour, which could lead to flooding. 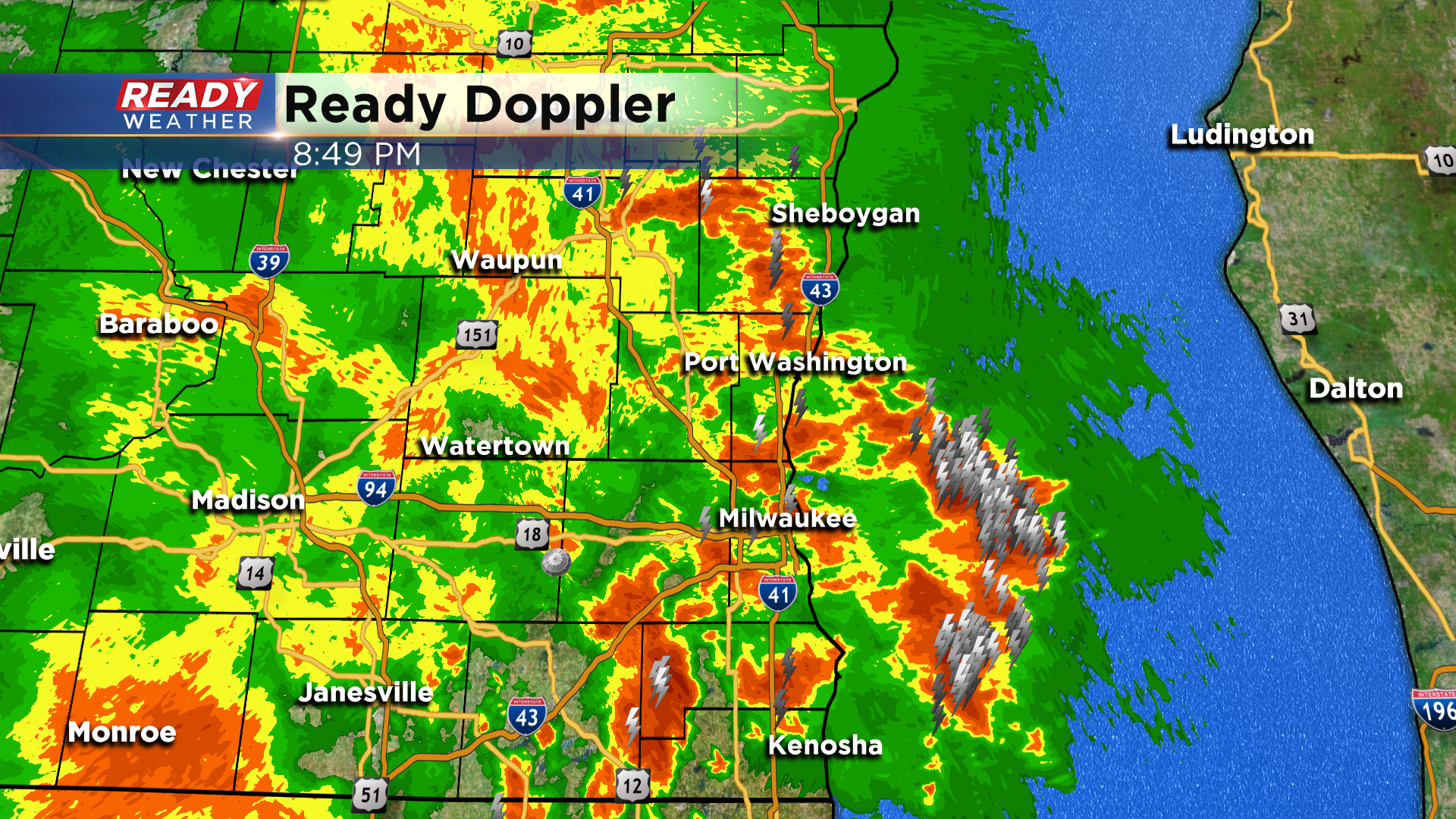 Remember not to drive through any flooded roadways, especially after dark as you don't know how deep the water is or if the road has been washed out.

A line of severe storms producing damaging winds is moving northeast at 35 mph. This line of storms has a history of producing tree damage around Delavan and produced a 50 mph wind gust in Oconomowoc. 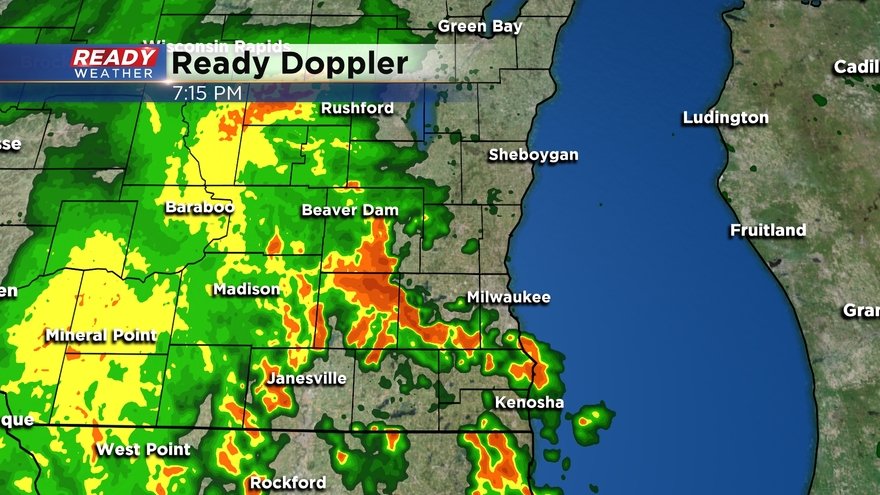 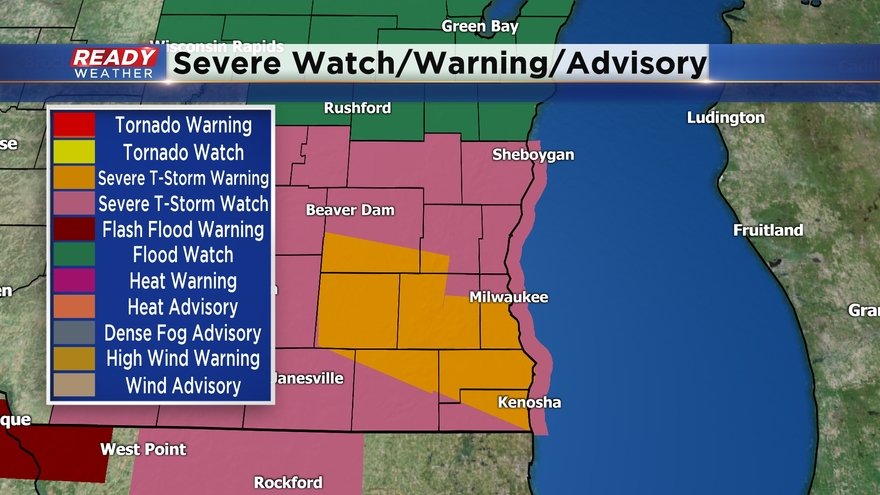 I would not be surprised to see additional Severe Thunderstorm Warnings issued north of Milwaukee as this line moves north.

A line of strong to severe storms is closing in on southeast Wisconsin as of 5:50 pm. A Severe Thunderstorm Warning is in effect for western Dodge county until 6:15 pm for a severe storm that has produced plenty of tree and power line damage as it tracked through south central Wisconsin. Wind gusts up to 60 mph will be possible with this storm as it moves NE at 45 mph. 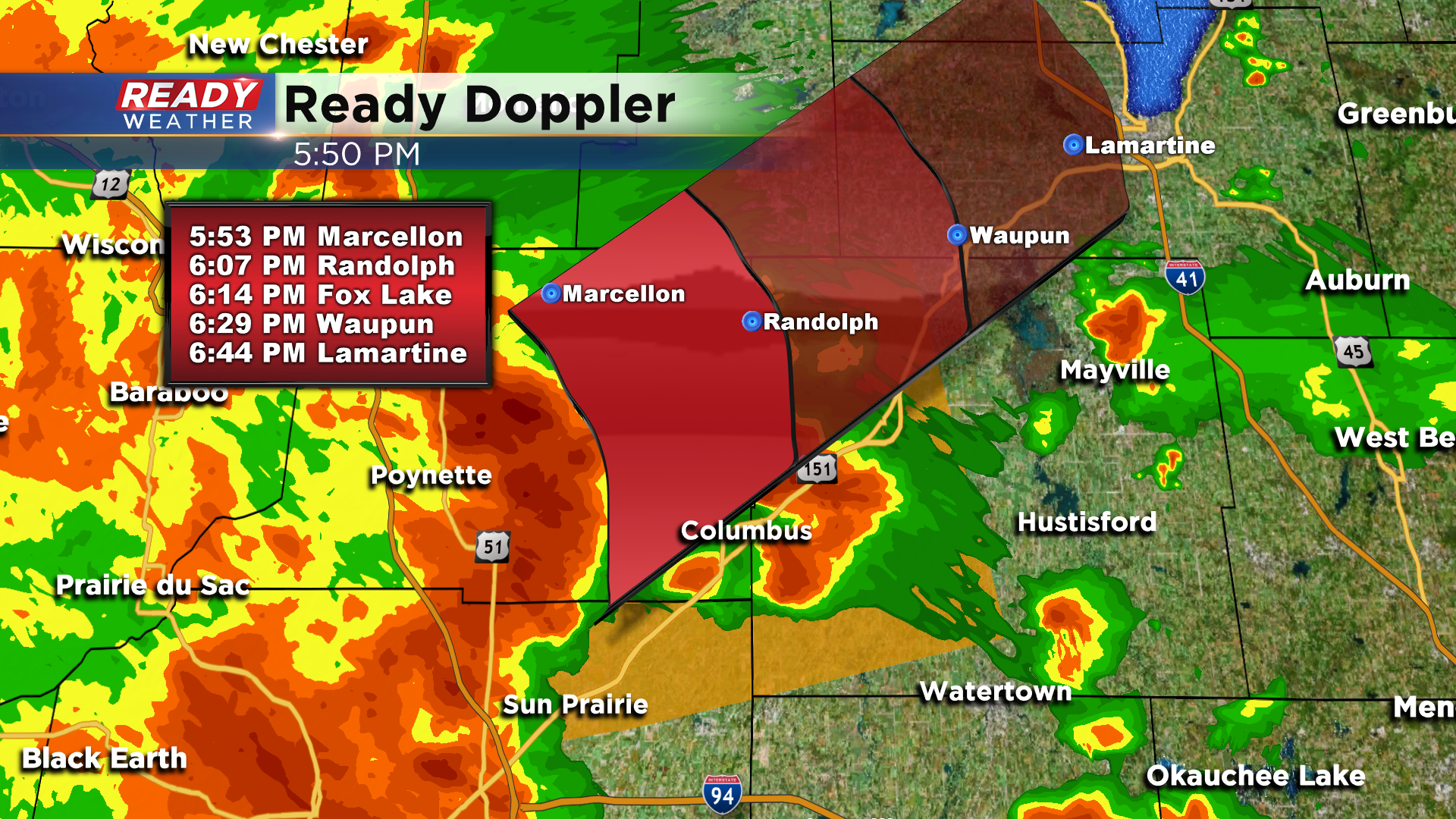 Additional strong storms are ongoing south of this severe storm. These storms could strengthen as they move into SE Wisconsin over the next 4 hours. 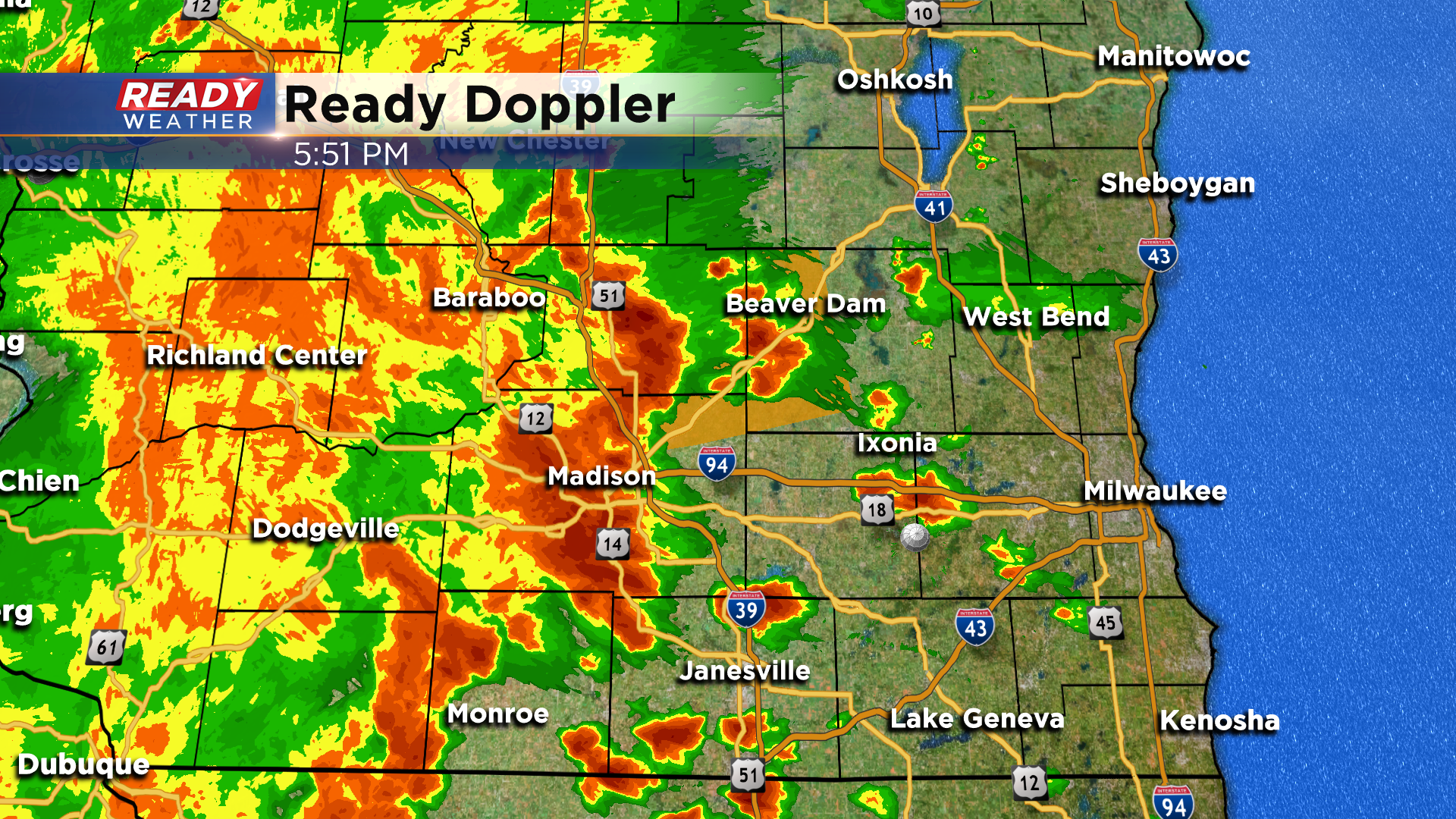 Charge your devices now in case you lose power this evening.

A Severe Thunderstorm Watch has been issued for all of southeast Wisconsin through 11 pm. Damaging winds and intense rainfall will be the primary threats and could lead to localized flooding. Some small hail is possible as well. 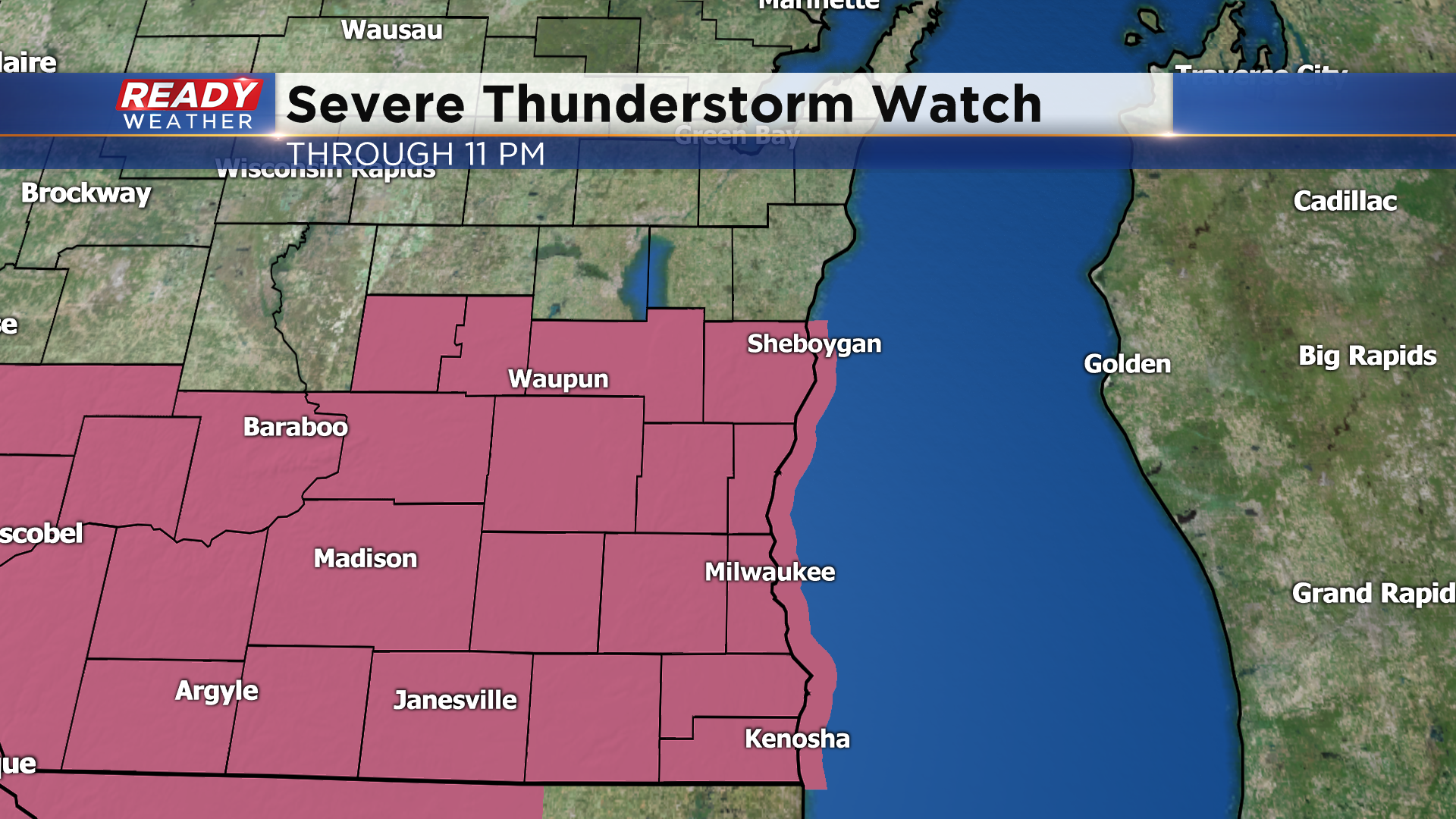 Several scattered storms have moved through SE Wisconsin this afternoon, with some producing tree limb damage in Dodge, Washington, Jefferson, and Fond du Lac counties. There's also been some minor street flooding in Fond du Lac due to the very heavy rain falling in a short period of time. There are still a couple of isolated storms out there right now, but nothing severe. 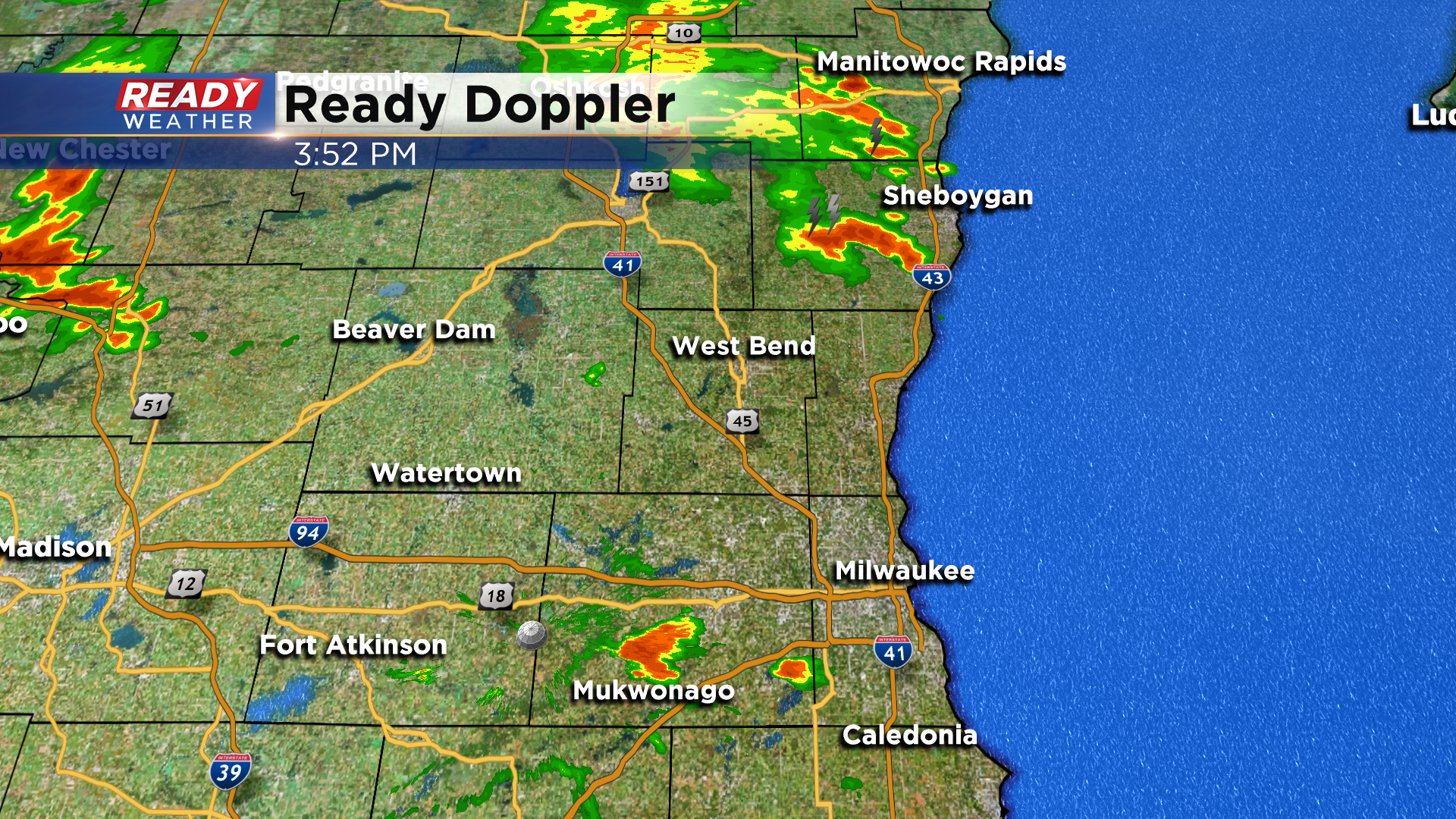 The main show is still to our west, with clusters of thunderstorms now in southwest Wisconsin. These storms are expected to intensify as they move into south central Wisconsin where there hasn't been much thunderstorm activity this afternoon. This main area of storms is on track to move into our western counties after 6pm. 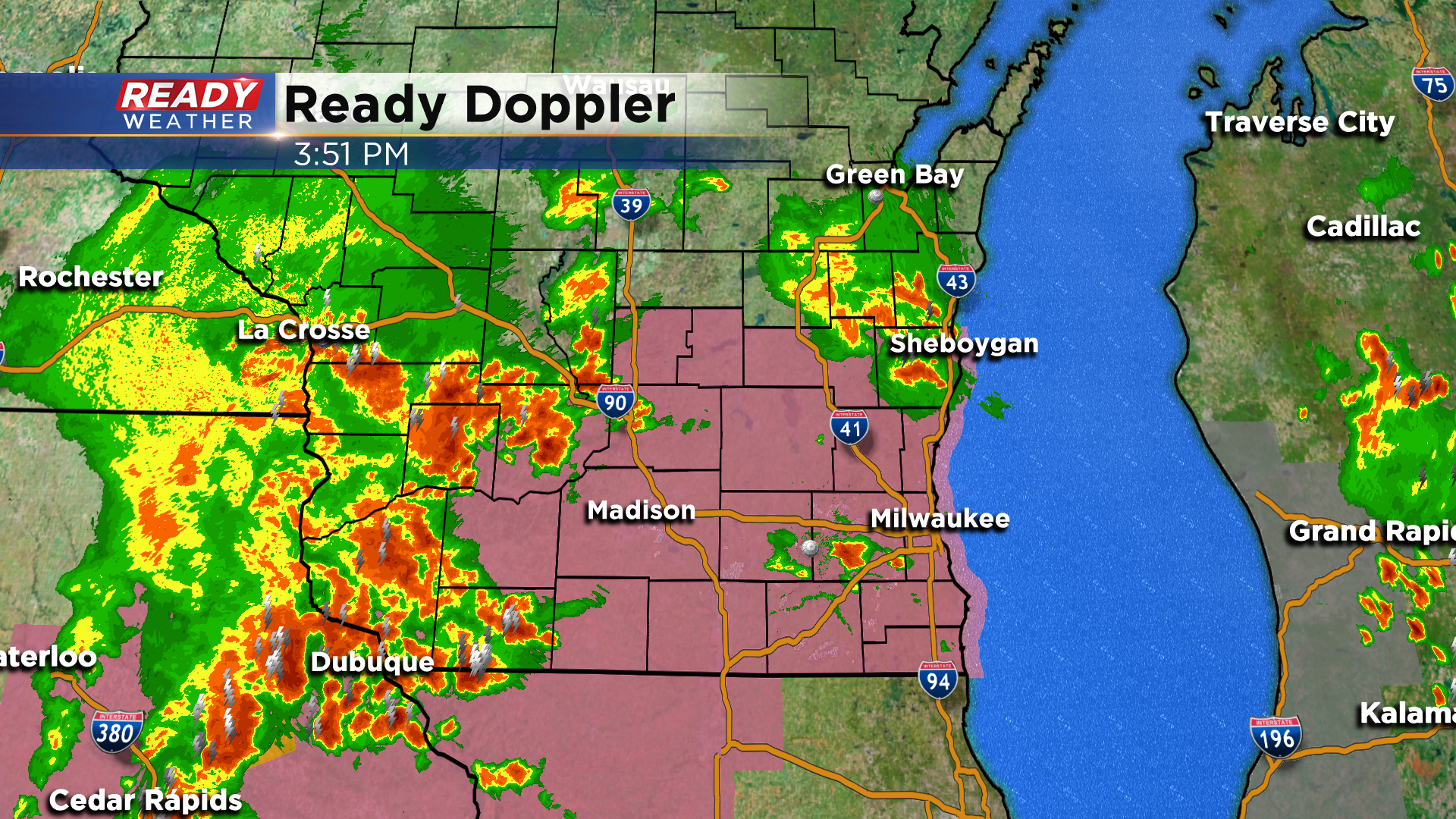 Clusters of thunderstorms continue to pop up across SE Wisconsin. Currently the most impressive storms are located in Dodge and western Fond du Lac counties, pushing northward at 20 mph. 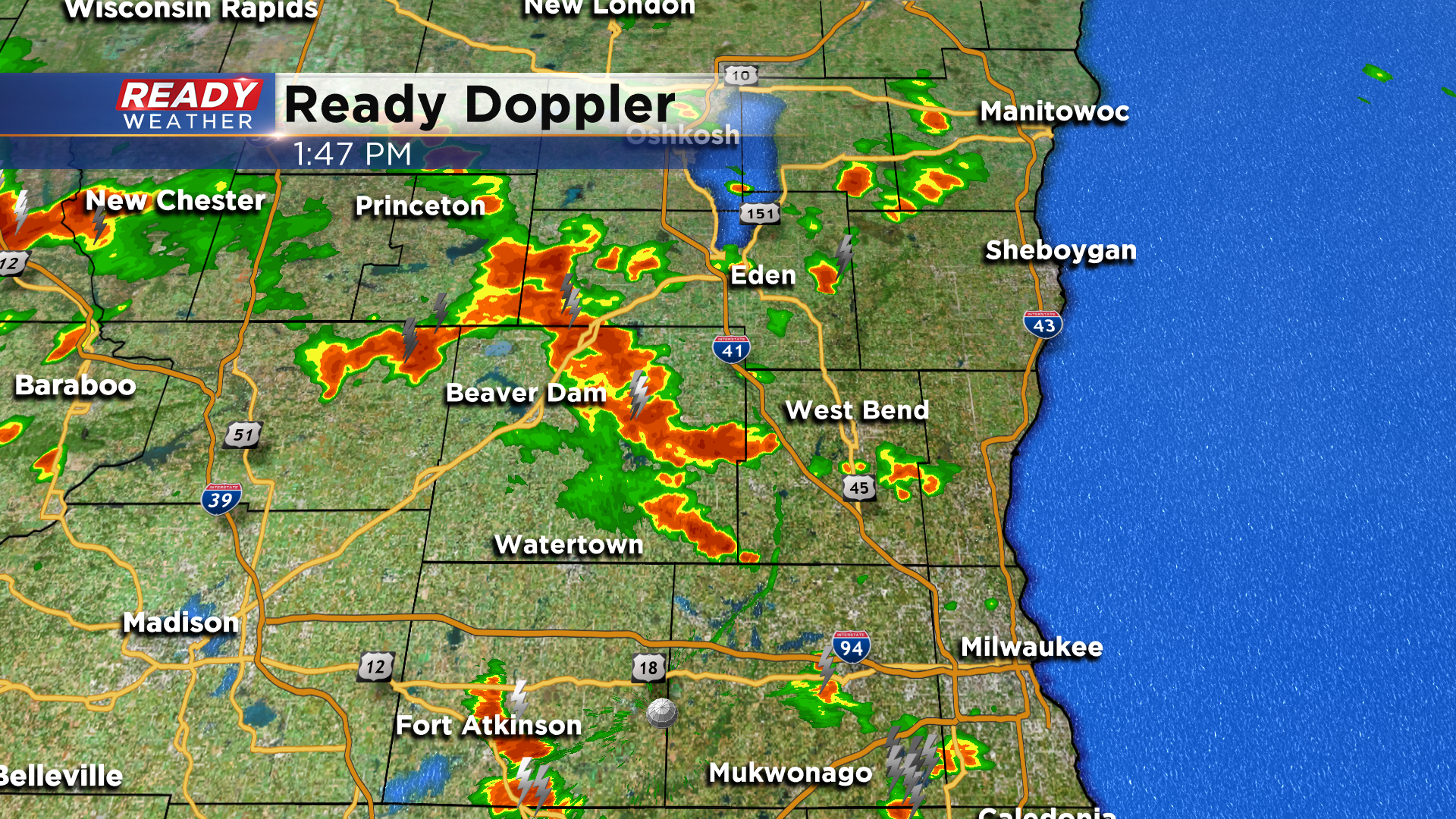 These storms are currently sub-severe, but a 49 mph wind gust was measured in Juneau as these storms rolled through. Expect very heavy rain and plenty of lightning. The main show is still to our west in eastern Iowa and far SW Wisconsin. 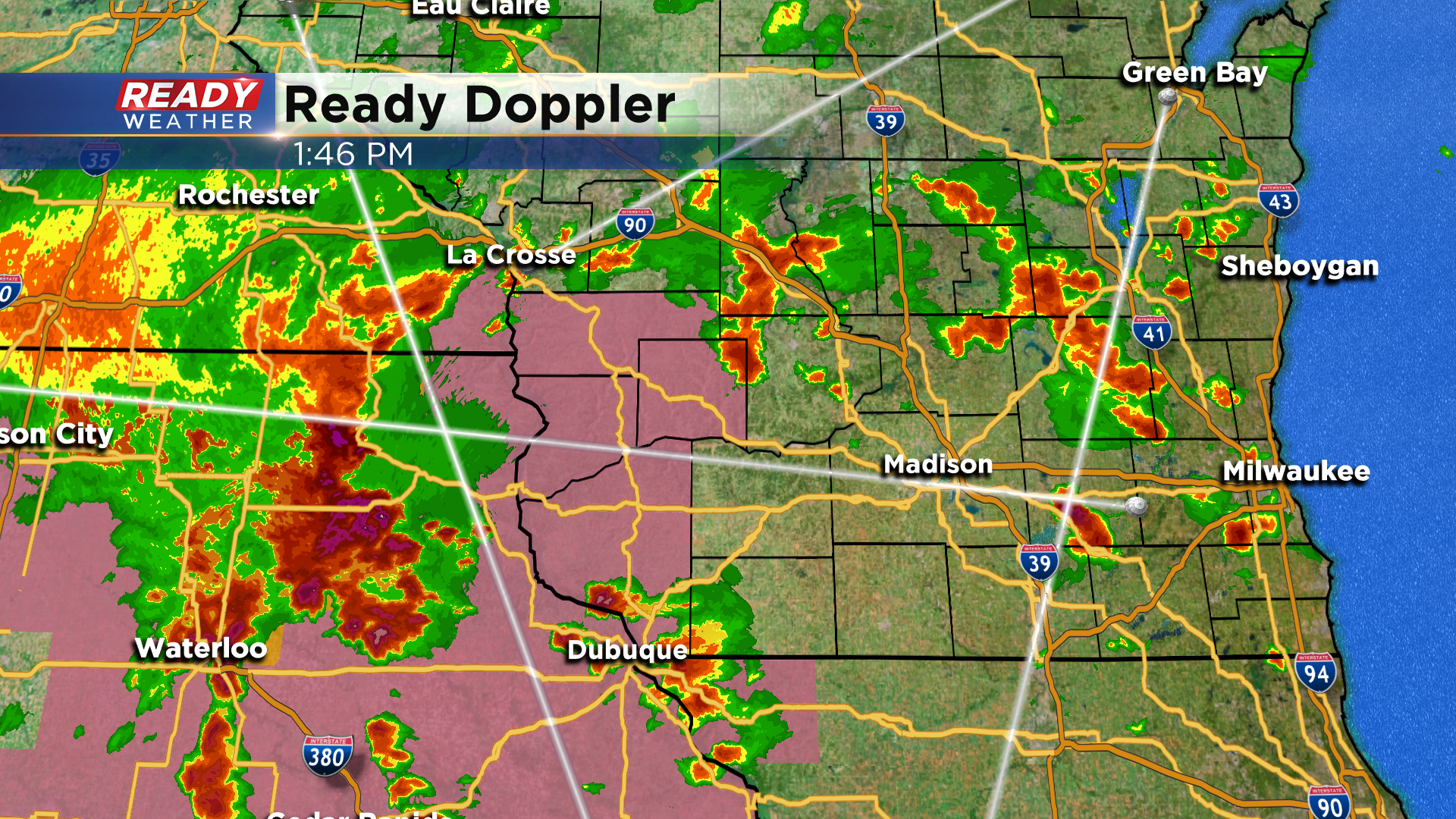 We're expecting more scattered storms to develop throughout the afternoon, with that main cluster of strong to severe storms working through between 7-10 pm. 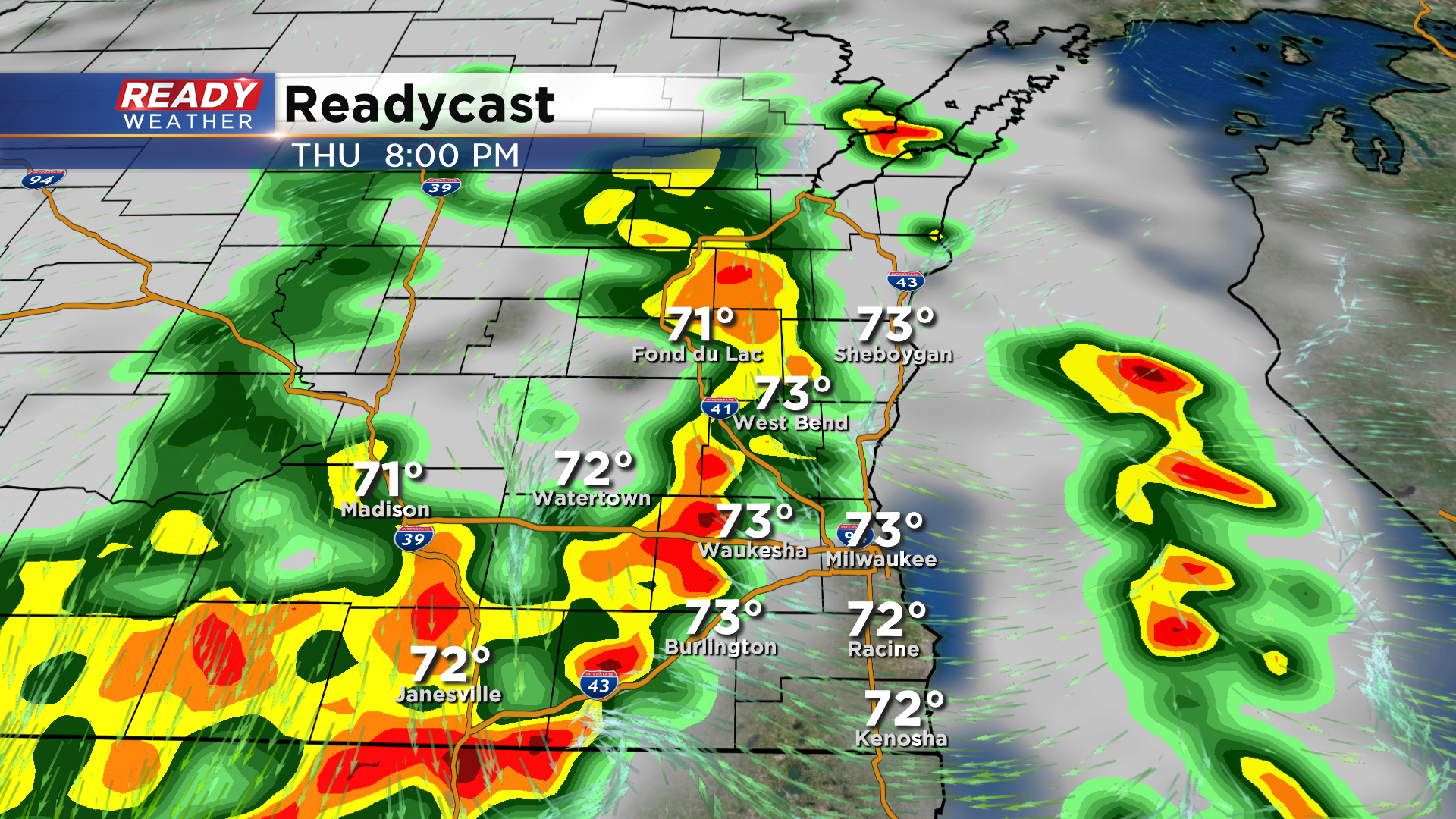 A few isolated downpours have popped up along the remnant outflow boundary closer to south central Wisconsin. Locally heavy rain and lightning will be the main threats with these storms as they slowly move northward. 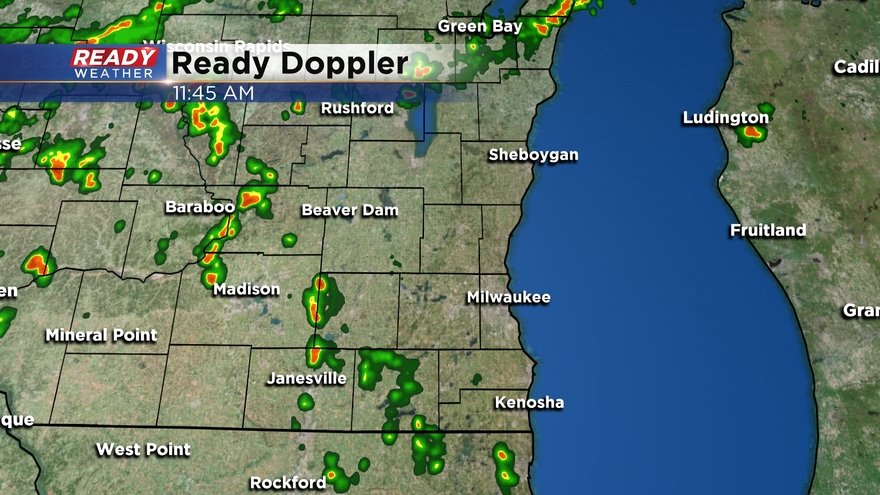 Severe weather is already ongoing back to the west in Iowa. The feature triggering these storms will track across southern Wisconsin later this afternoon through the evening, causing additional strong to severe storms to develop. 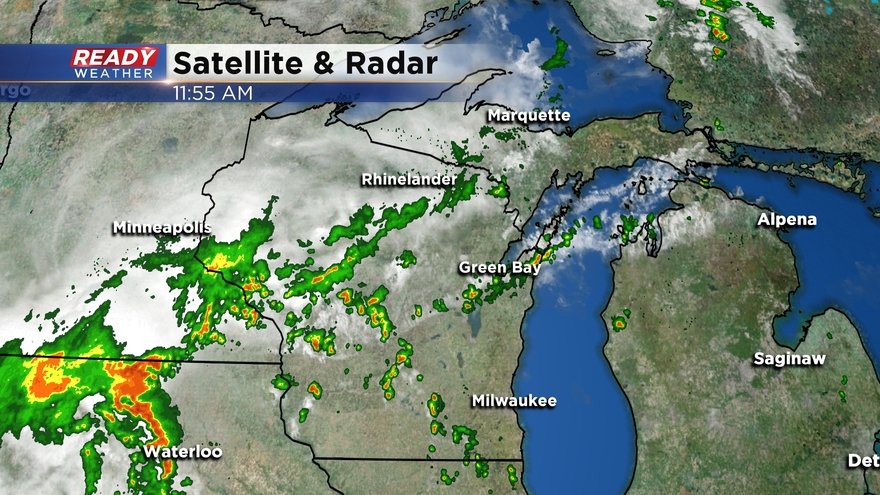 Recent model trends suggest a few scattered storms will start to pop between 2-3 pm with rain and storms becoming likely across the area by mid evening. Storms between 2-11 pm could be strong to severe with damaging winds, heavy rain, and hail being the primary threats. All of southeast Wisconsin remains under a Slight Risk (Level 2 of 5) for severe storms today.

A few showers and storms popped up Thursday morning, mainly north of I-94. Some of the storms were pretty stagnant with heavy rain reported in Sheboygan and West Bend. Most of that rain has now dissipated but has left behind some boundaries circled in the graphic below. Those boundaries could be the focus of some storm development later today. 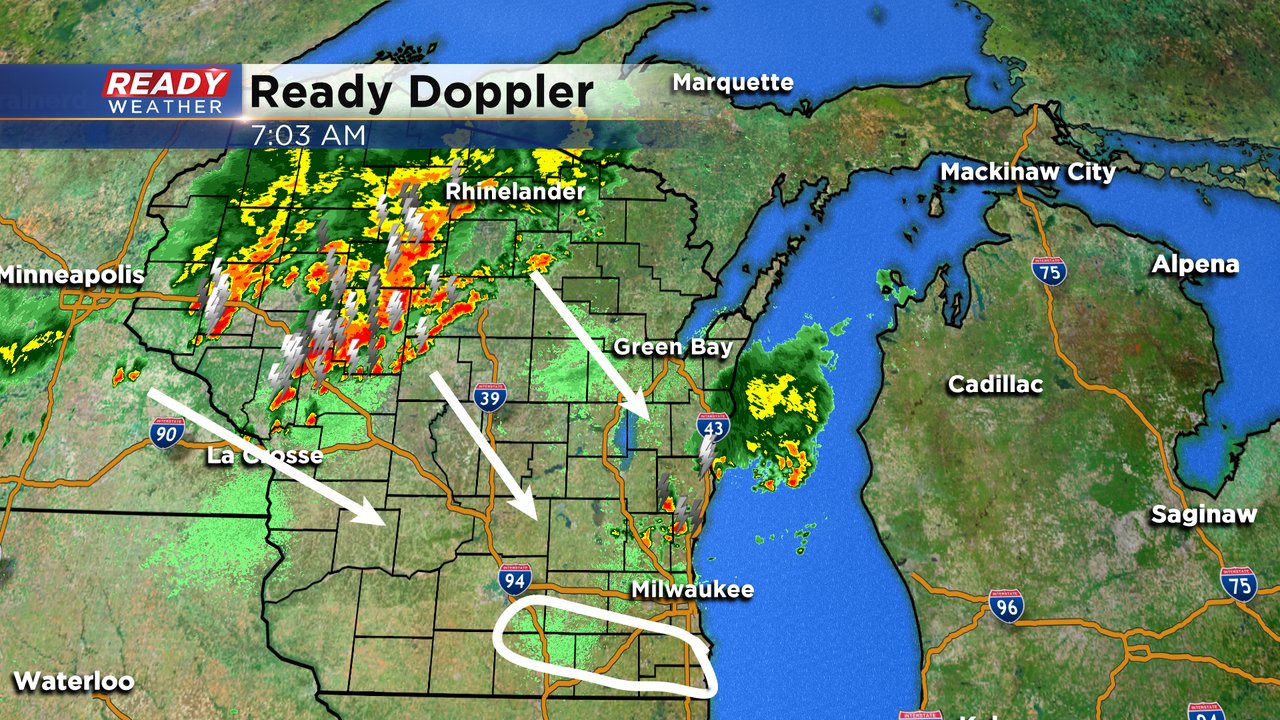 A cluster and broken line of storms is also currently moving south from northern Wisconsin. Those storms will likely reach our area later this afternoon and evening with the potential for some storms to be strong to severe.

On Wednesday the feels like temperature reached well into the 90s and even over 100* for a few communities. Thursday will be just as hot with a high around 90, dew points in the low 70s making it feel like the middle to upper 90s. 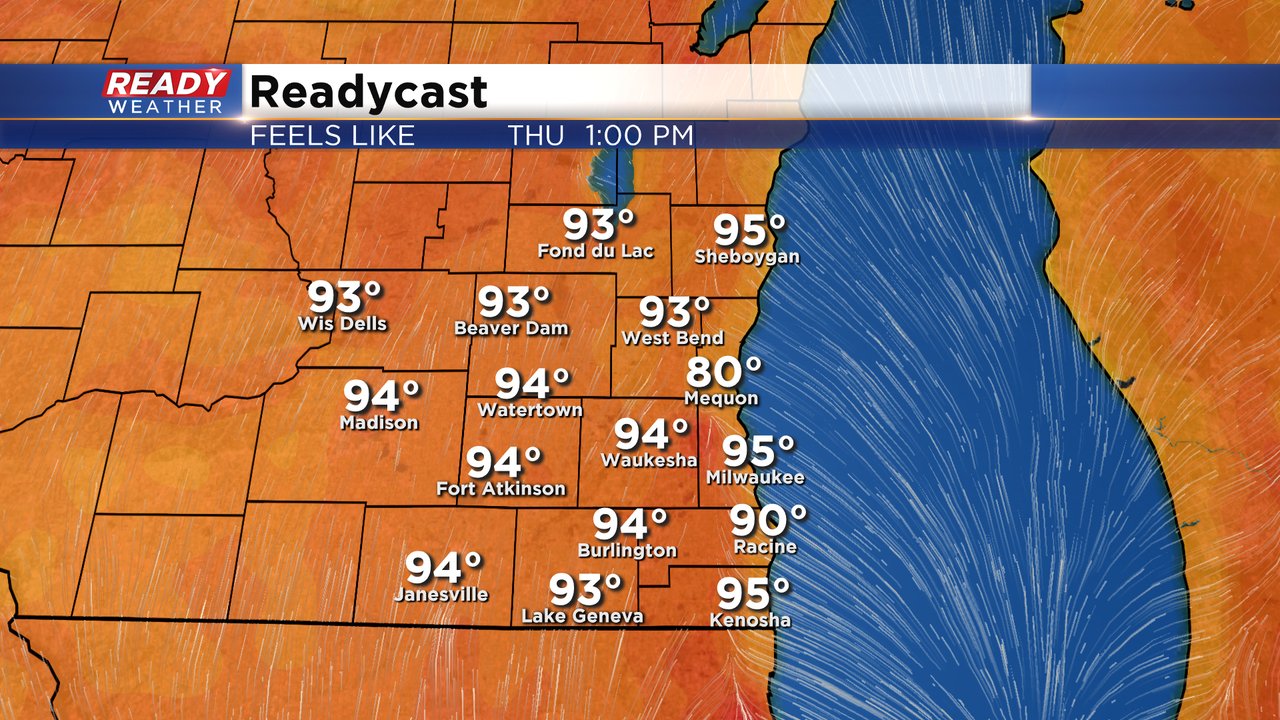 All of that heat and humidity combined with a few approaching storm boundaries will give us a chance for scattered thunderstorms that could become strong to severe. The timing of the storms is still in question with different weather models showing different solutions. A few storms could roll in as early as the late morning but the best chance for severe weather will be during the afternoon and evening from 3 pm to midnight. 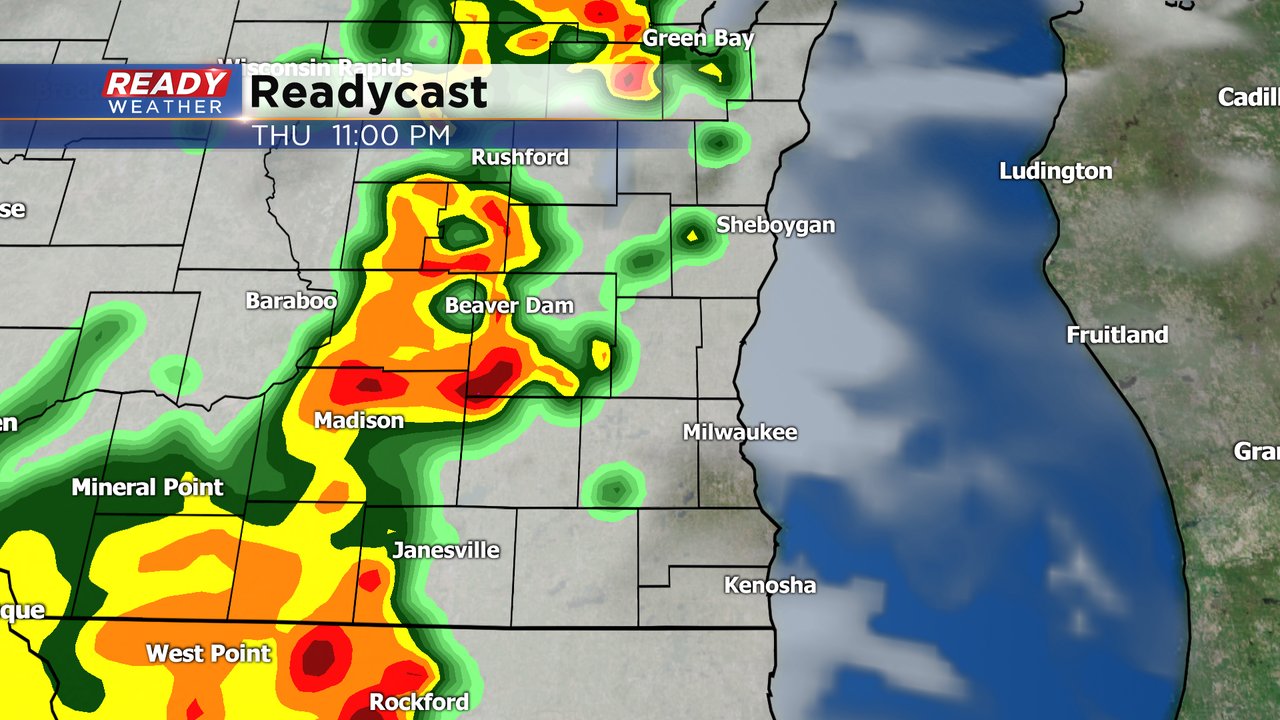 All of southeast Wisconsin is in the slight risk for severe weather which is the second of five severe levels. Damaging wind will be the biggest threat with any severe storms that form with wind gusts around 60 mph. Some storms could have some hail and heavy rain. The tornado risk is basically 0 so some good news there. 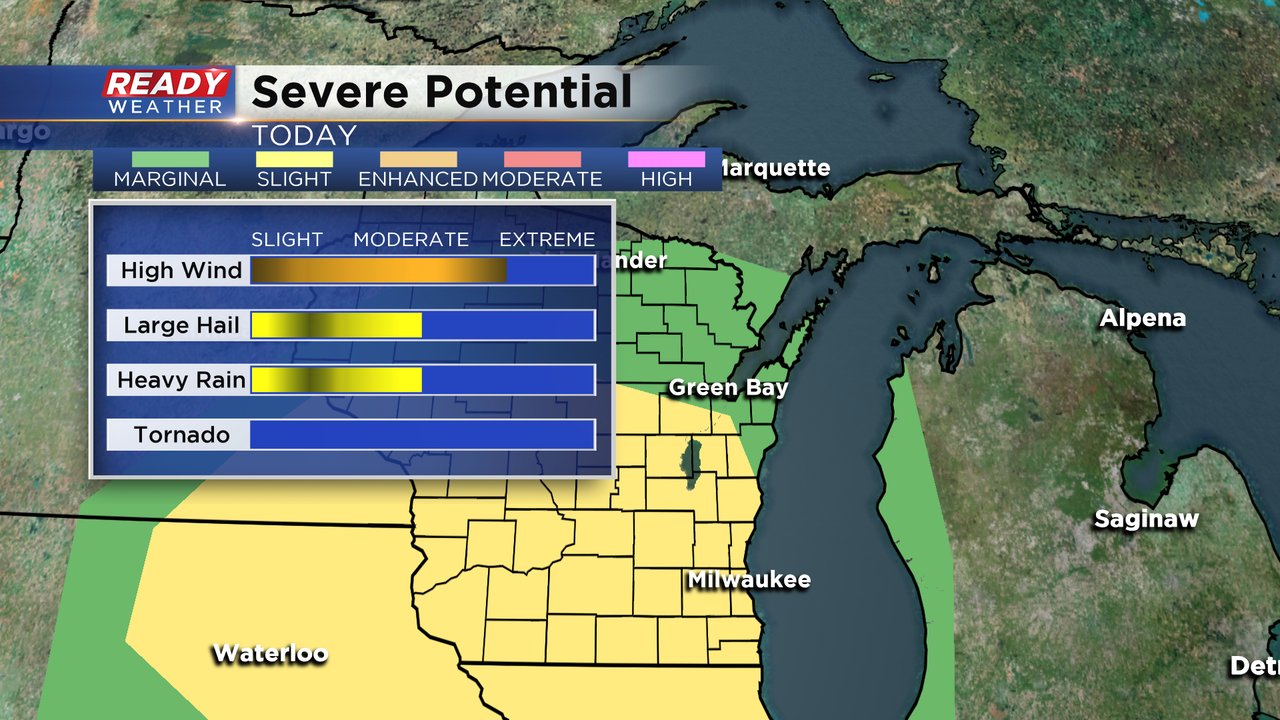 Although heavy rain and flooding is not a big risk, the storms we have seen this week have been very slow moving. Those slow moving storms could allow rain totals to increase leading to some wet basements and ponding on are roadways. Over a half inch of rain is possible in spots that see the most storms. 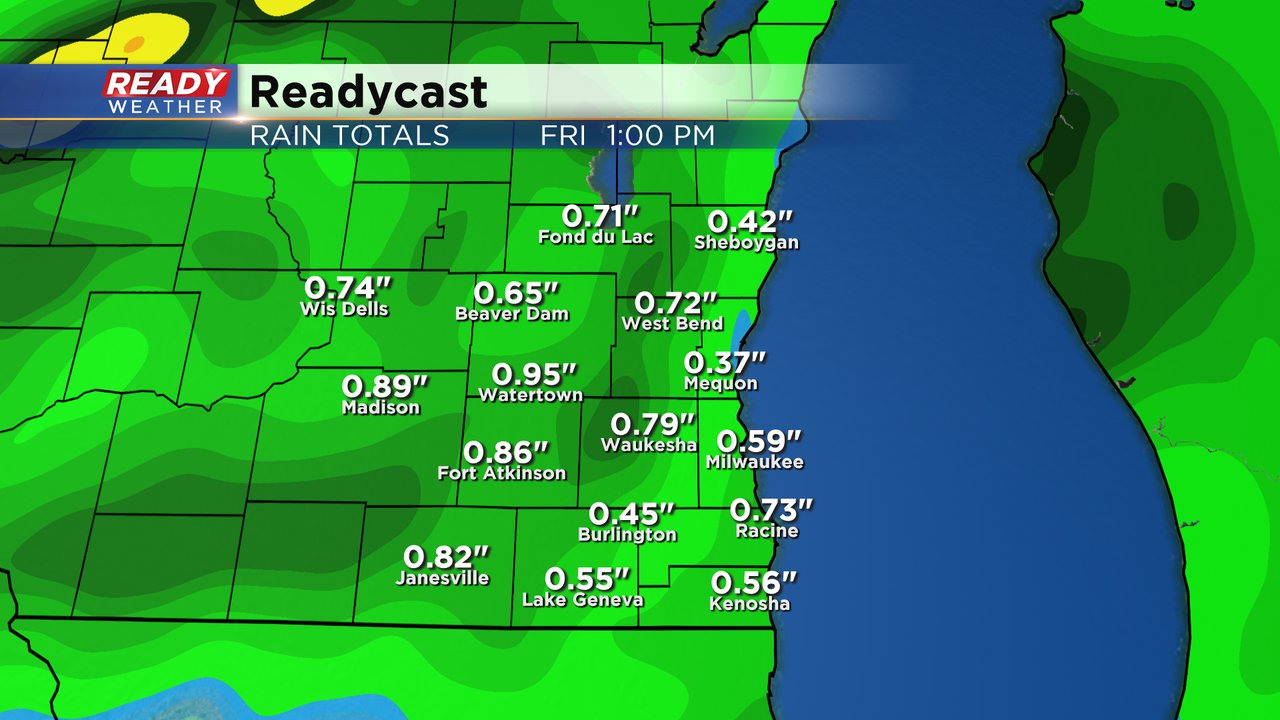 Download the CBS 58 Ready Weather app so you can get alerts if watches or warnings are issued and track the thunderstorms as they pop up.