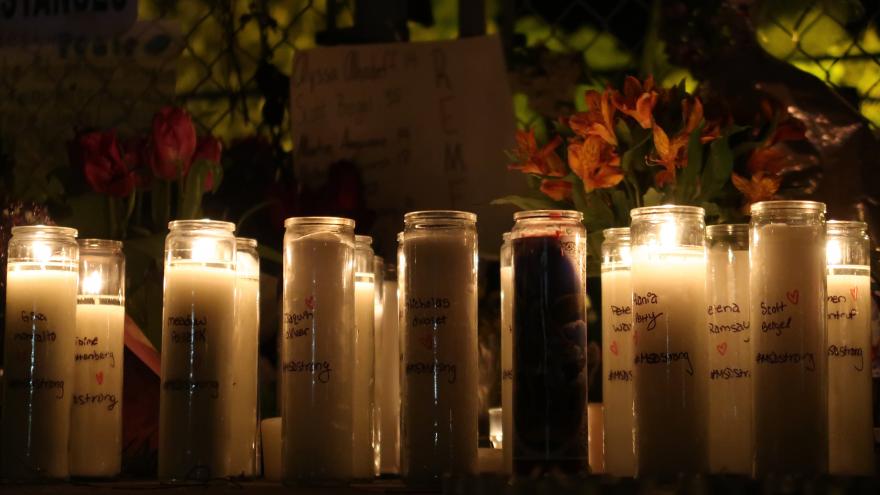 PARKLAND, Fla. (CBS News) -- The line of students and their parents wrapped around Stoneman Douglas High School, several thousand people entering the campus for the first time since a gunman took 17 lives nearly two weeks ago. They walked solemnly but resolutely Sunday through gates that had been locked to all but law enforcement and school officials since the Valentine's Day shooting, set to collect backpacks and other belongings left behind as they fled the massacre.

To enter, they passed within feet of the three-story building where the shooting happened. It is now cordoned off by a chain link fence that was covered with banners from other schools showing their solidarity.

"Just seeing the building was scary," freshman Francesca Lozano said as she exited the school with her mom. Still, she was happy to see her friends. "That made it a lot better."

The 3,200-student school reopens Wednesday and administrators said families would get phone calls about details later. Sunday was a day to ease into the return.

"Two of my best friends aren't here anymore," said freshman Sammy Cooper, who picked up the book bag he had dropped as he saw the accused gunman, 19-year-old Nikolas Cruz, begin shooting. "But I'm definitely going to school Wednesday. I will handle it."

The students were greeted by 17 people dressed in white costumes as angels standing beside a makeshift memorial outside the school. Organizer Terry Decarlo said the costumes are sent to every mass shooting and disaster so the survivors "know angels are looking over them and protecting them." Many of those dressed as angels at Stoneman Douglas on Sunday were survivors of the 2016 mass shooting at the Orlando nightclub Pulse, where 49 people died.

Broward County Sheriff Scott Israel has come under withering scrutiny after the revelation last week that deputy Scot Peterson, the school's assigned security officer, was nearby when the shooting began but did not go into the building to confront Cruz during the attack. The sheriff's office is also facing a backlash for apparently mishandling some of the 18 tipster calls related to the suspected shooter. The tips were among a series of what authorities now describe as the clearest missed warning signs that Cruz, who had a history of disturbing behavior, posed a serious threat.

Israel defended his leadership Sunday and said investigators were looking into claims that three other deputies were on the scene but failed to enter the school when the chance to save lives still existed. To date, the investigation has pointed to only one deputy being on school grounds while the killer was present, he told CNN.

Israel also labeled as "absolutely untrue" reports that the deputies waited outside even though children were inside the building needing urgent medical treatment.

State Rep. Bill Hager, a Republican lawmaker from Boca Raton, has called on Scott to remove Israel from office because of the missed red flags.

CBS News correspondent David Begnaud reported that Hager is among 73 GOP lawmakers in Florida calling on the governor to suspend Israel.

Israel vowed not to resign, saying Hager's letter "was full of misinformation" and "shameful, politically motivated."

House Speaker Richard Corcoran stepped up the pressure Sunday, calling on Scott to suspend the sheriff.

"In the years leading up to this unspeakable tragedy, Sheriff Israel, his deputies, and staff ignored repeated warning signs about the violent, erratic, threatening and antisocial behavior of Nikolas Jacob Cruz," Corcoran said in a letter signed by more than 70 lawmakers.

Scott said in a statement Sunday that he understands Corcoran's concerns, but added "there must be an independent investigation.

"Like me, he wants the families to have answers and for there to be full accountability. That's what the victims and their families deserve," Scott said.

Israel insisted that lapses were being investigated. He told CNN that a deputy who responded to a Nov. 30 call referring to Cruz as a "school shooter in the making" was being investigated by internal affairs for not filing a report and had been placed on restrictive duty.

"There needed to be report. And that's what we are looking into- that a report needed to be completed, it needed to be forwarded to either Homeland Security or a violent crimes unit," Israel said.

The FBI has acknowledged that it failed to investigate the tip about Cruz that the agency received on Jan. 5.