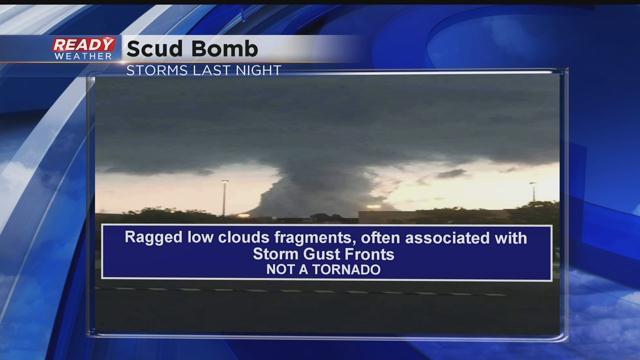 Storms on Thursday evening came with plenty of wind and produced lots of interesting cloud structures. One picture in particular caught quite a bit of buzz on social media. It's the thumbnail picture in this story. Click on it to see it in a larger view. While it looks like a tornado, it is not. It's a cloud structure called a "scud bomb".

Scud bomb clouds appear as low hanging fragments and generally detached, irregular clouds found beneath cumulonimbus clouds. These clouds are often more wispy in appearance than that of a funnel clouds, but they can look similar.

Scud bomb clouds may also form when an updraft ingests precipitation-cooled air from the downdraft. Scud forming in this region of the storm, if moving laterally, will tend to move inward towards the dominant updraft. Rising scud may condense and organize into a wall cloud.

Scud bomb clouds can often be mistaken for a developing tornado, but a closer inspection should find no rotation.

Here's another visual that depicts the warm air being drawn in along with the cooler downdraft that help to create these cloud structures. 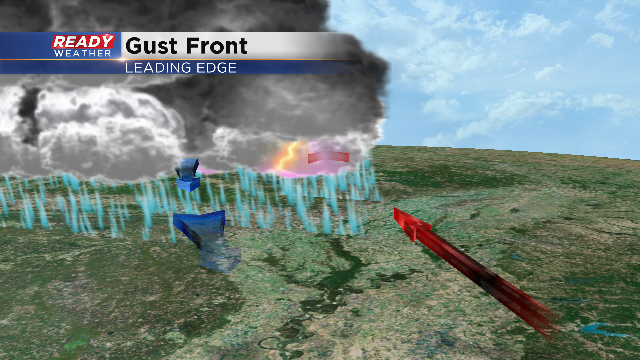 If you're a cloud gazer, you'll have another chance to see some towering clouds this weekend. A chance of storms will be with us, possibly during the afternoon Saturday, but more likely overnight into Sunday morning. As always, we love showing off your weather photos. You can send them to pix@cbs58.com or upload them right from the photo library in your phone to our CBS58 Weather App.