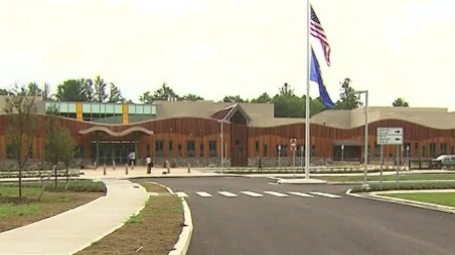 Newtown, Connecticut (CNN)Sandy Hook Elementary will be filled with students again this August.

The rebuilt school bears no memories or resemblance of the old building that stood on the same property December 14, 2012. That was the day an armed man walked into the school and took the lives of 26 people -- 20 of them children.

The only sense of familiarity some of the returning students will have is Shelley the turtle, who's waiting for school to start in her brand new aquarium. Newtown First Selectman Pat Llodra says Shelley has been with Sandy Hook Elementary for over a decade.

"When students come in that front door, they're going to see their turtle," Llodra said. "Keeping something they love front and center ... makes them feel much more comfortable."

The nature-themed, two-story school takes after what the community is most familiar with, Newtown's green scenery.

The school welcomes students with a "Be Kind" mosaic wall and "tree" bulletin boards, wall tile "tree trunks" and a mural of ducks that should remind students of the ones that used to gather at the old school.

The building consists of over 25 classrooms with similar motifs and two treehouse spaces on the second floor bring the outdoors inside for the students.

"My direction was that this building needed and must feel like a warm and nurturing elementary school," says Joseph Erardi, superintendent of schools. "This school is an enormous step forward for the process of healing in Newtown."

The building also includes security cameras throughout the ceilings of the hallways, secure doors, visible locks on each door and bullet-proof glass. Other security and safety plans in the school are confidential, Erardi said.

About 70 of the new fourth-graders who were kindergartners at the old Sandy Hook Elementary in 2012 will be returning this school year, joined by more than half the old faculty members. Others faculty members have retired, transferred or did not return because of personal reasons.

Llodra says the goal was to "create a space at the highest and best of levels of a marriage between art and architecture that honored every single victim, every family, every parent, every student."

"Let me say unequivocally that we would trade in a minute this beautiful new school for the more familiar and aged Sandy Hook school built in the '50s if we could just change the past," Llodra said.