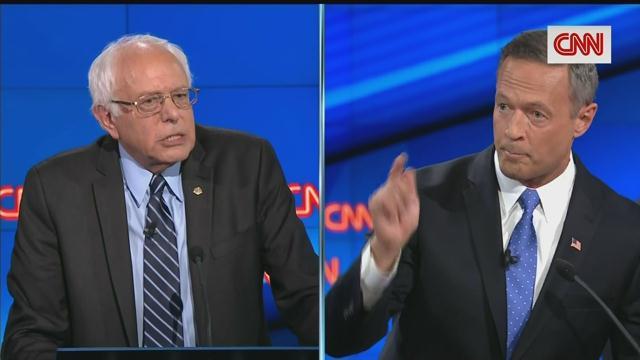 Many political observers assumed Hillary Clinton would be pounced upon Tuesday at the debate over her email scandal.

Instead it was her closet competitor, Bernie Sanders of Vermont, who was forced to explain his votes against the Brady Gun Control Bill.

The issue is of particular note to local viewers. The issue of clamping down on second hand sales or straw purchases was at the heart of a jury verdict against Badger Guns earlier in the day at the Milwaukee County Courthouse.

"I think we have to move aggressively towards federal legislation against these straw man purchases," Sanders told the crowd in Las Vegas.

But Clinton was quick to bring up the record of her former colleague when she was Senator of New York.

Sanders said part of his position stems from representing a rural state where hunting is important.

Former Maryland Governor Martin O'Malley was most animated when jumping into the topic.

"We were able to pass this and still protecting hunting," said O'Malley who then turned to Sanders. "And we did by leading with principle not pandering to the NRA."

The idea of Sander pandering generated some chuckles, considering he received at D- grade from the National Rifle Association. O'Malley received an F.

He said the fact that the strongest criticism was for Sanders probably means Clinton will maintain her front runner status.

"I think the field sees Sanders as a threat. But I was surprised that Clinton did not receive more attention from the other candidates. There are a lot of different dynamics going on here."

He speculated that O'Malley might even be positioning himself as a number 2 on the Clinton ticket, by aligning himself with her when it comes to criticizing Sanders.

"I think he's making a play to be a vice presidential candidate  or a cabinet position."

Dr. Nolette was a special live guest Tuesday on the CBS 58 News at 10 p.m.

His interview is attached to the text.