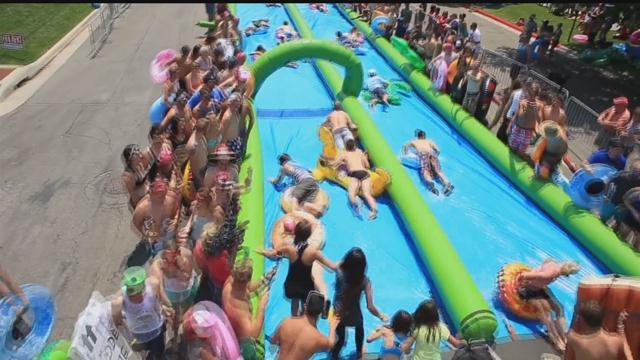 The Salvation Army Emergency Lodge stands to gain some of the proceeds of the \"Slide the City\" event scheduled for Saturday in Milwaukee.

As of 5 p.m. Thursday, however, the event organizers had still not put up enough fencing or portable bathrooms to be granted the proper permits to hold the event.

Todd Weiler of the Dept. of Neighborhood Services tells CBS 58's Marshanna Hester that  \"Slide the City\"  until fencing and porta potties to fulfill requirement of water attraction are in place, the permit will not be issued.

Weiler did believe there was a  chance of success  that a permit will be issued, but  the ball is in the organizer's court.

They City of Milwaukee is prepared to issue the permit day of, but ideally inspectors would like to have it settled by 5pm Friday.

The 1000 feet of slick vinyl slip and slide will run along  Highland Avenue between 10th and 6th Streets.

A portion of the proceeds going to the Emergency Shelter run by the Salvation Army.

\"We're really excited,\" shelter manager Tom Flatley told CBS 58 News. \"We're very grateful that they want to partner with us. The money's that raised will go to the 120 people who stay at the shelter here. So, that money will go towards basic needs like food, case management, shelter, toiletries and linens. So, people stay here 30 to 90 days. We have over 2,000 people stay here a year. So, this money will be a big help to us.\"

For information on Slide the City Milwaukee click here