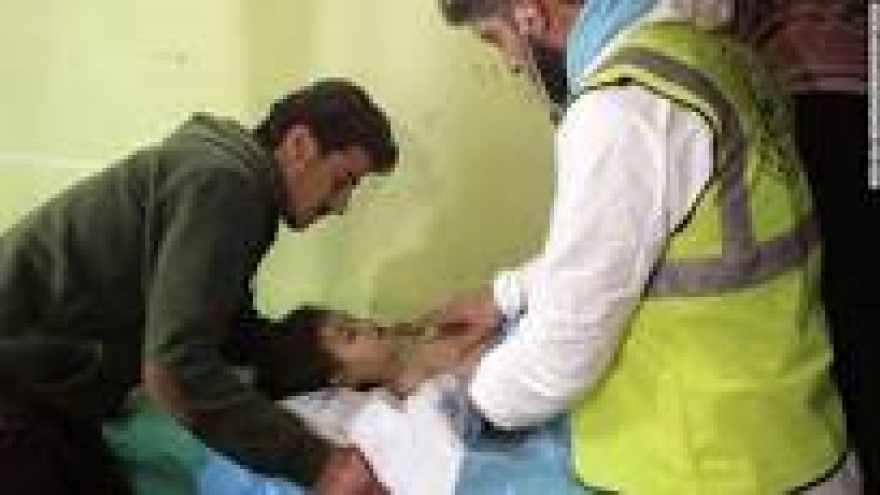 (CNN)Russia has claimed the deaths of at least 70 people in an apparent chemical weapons attack in Syria were caused by a regime airstrike on a \"terrorist\" ammunition depot on the ground.At least 10 children died in Tuesday's attack on a rebel-held town in Idlib province. Dozens of people were treated for symptoms of chemical poisoning, including foaming at the mouth and suffocation.

The World Health Organization said some victims showed symptoms consistent with exposure to a category of chemicals that includes nerve agents.

Syria denies the accusations and Russia says it had no warplanes in the vicinity.

The Russian defense ministry claimed on its Facebook page that a Syrian airstrike strike hit \"workshops, which produced chemical warfare munitions\" in the eastern outskirts of Khan Sheikhoun.

If the incident is confirmed to be a chemical weapons attack, it would be one of the deadliest of its kind since the Syrian war began six years ago.Key developments

The attack coincided with a two-day meeting in Brussels on Syria's future.

Speaking at a high-level meeting in Brussels on the future of Syria, Johnson pointed the finger firmly at the Syrian regime.

\"All the evidence I have seen suggests that it was the Assad regime who did it, in full knowledge they were using illegal weapons in a barbaric attack on their own people,\" Johnson said.

\"We must accept the paradox of this meeting today. We are all here together trying to assemble a vast .... sticking plaster for Syria when there are still governments here supporting the Assad regime, which is inflicting those wounds and inflicting them with weapons that were banned internationally a century ago.\"Syrian President Bashar al-Assad's military has denied using chemical weapons and blamed \"terrorist\" groups for the carnage.

A UN investigation in August last year found that chemical weapons had been used in Syria, both by the national air force and ISIS militants. It found two instances where regime forces had used chlorine as a chemical weapon, and one where ISIS had used mustard gas between 2014 and 2015.

No rebel or terrorist group in Syria is believed to have the capacity to carry out airstrikes in Syria.Eyewitnesses said the attack's aftermath was nightmarish and unlike anything that they had previously seen.

Feras al-Jundi, a physician who was an early responder in the town of Khan Sheikhoun in Idlib told CNN that, upon entering the hospital where many victims were taken, \"there were many, many atrocious things to see.\"He described seeing whole families who had died, corpses of those who had perished instantly in the attack, and also the dying breaths of those who the medical teams were unable to save.

\"I have never in my life seen anything like that,\" he told CNN's Christiane Amanpour.

\"The view was heartbreaking. It makes you (cry) blood.\"

He added he didn't see anyone who looked like a combatant among the dead.At the meeting in Brussels, the United States, Britain and France circulated a resolution to be presented at an emergency session at the United Nations Security Council later Wednesday condemning the attack.

If the resolution goes to a vote, it is likely to be blocked by Russia. Russia has used its veto power as a permanent member of the Security Council at least seven times on Syrian resolutions.Delegates at the conference in Brussels, including UN Secretary General António Guterres, said there was an urgent need to find a political solution in Syria.

\"The images we have seen yesterday from Syria remind us all that here we have a responsibility to unite for real with a serious engagement the international community, the regional players, but also the Syrian parties to make peace,\" said EU foreign policy chief Federica Mogherini.

But US Ambassador to the UN Nikki Haley has previously said that Assad's ouster was not a priority for President Donald Trump's administration.

\"Do we think he's a hindrance? Yes. Are we going to sit there and focus on getting him out? No,\" she said last week.Feras, the doctor who witnessed the aftermath of the attack, expressed deep frustration with the international community for failing to hold the Syrian regime to account for its atrocities.

\"I feel frustrated, because of the international community and the UN that have not forced the regime to abide by the Security Council resolution but ... has been watching and doing nothing, which has allowed the regime to keep bombing the people with cluster bombs, scud missiles and now gas.\"The Syrian Coalition, an umbrella opposition group, compared the suspected chemical attack with one in Eastern Ghouta in 2013 \"that the international community allowed to pass without accountability or punishment.\"That attack tested the resolve of then-President Barack Obama in the face of atrocities committed by the Assad regime.Referring to the 2013 attack, McCain told CNN: \"We've seen this movie before, it was when Barack Obama said they would have a red line, they crossed it and he did nothing. Bashar Assad and his friends, the Russians, take note of what Americans say.\"

The Ghouta attack prompted Obama to ask Congress to authorize military action against Syria in 2013. Shortly after, Syria agreed to a Russian proposal to give up control of its chemical weapons, leading Obama to retreat from threats of military action.

White House press secretary Sean Spicer told reporters Tuesday that the attack is a \"consequence of the past administration's weakness and irresolution.\"