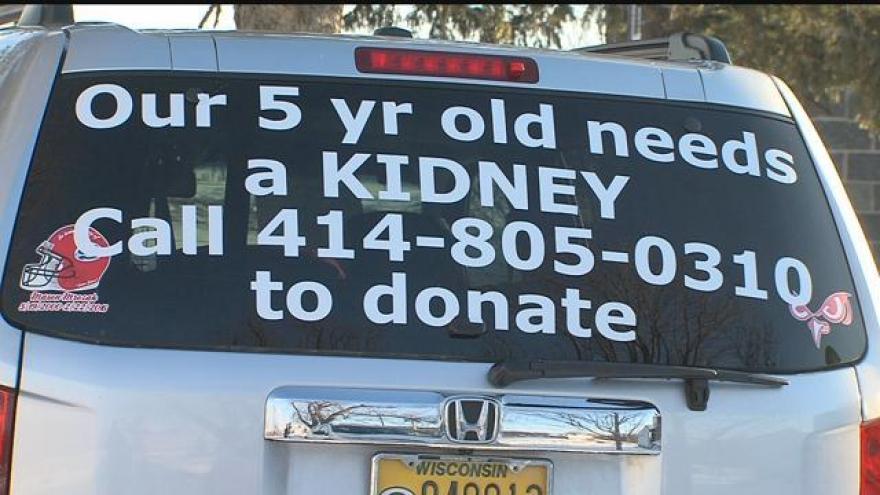 Five-year-old Elizabeth wants the chance to live a normal life.

"She is to the point where she hates her machine," said Beverly Melius. "She cries every night getting hooked up."

Every night for 10 hours, Elizabeth gets a dialysis treatment because her kidney has stopped removing waste from her body. All the tubing, mesh and fluids have been routine for more than half of her life.

"She's stable, which is a good thing because you don't want to be in an emergency situation and then they don't find a donor."

Melius is Elizabeth's adoptive mother. In the last few weeks, she's gotten calls about possible kidney donors, but neither worked out.

In the meantime, Beverly's plan to is raise awareness. She put a decal on the back of her car and it's catching attention in Washington County.

"On Facebook, I saw a man in Green Bay advertise that his wife needs a kidney and I thought, 'I'm just gonna do this,'" she said.

People spotting Beverly's message have posted it to Facebook, sharing it more than 100 times. And best of all, it's working.

"In one week they've hopefully got three possible donors for someone, if not my daughter, someone else in need because the need is great," she said.

Beverly said a phone call is all it takes to be a hero and give a gift to improve the life of someone like Elizabeth, who deserves the chance to live without limits.

"She's excited to eat potato chips take swimming lessons," she said. "Be a child without having to worry about her machine."

Elizabeth spent three months in the hospital because they couldn't find her a foster home. But after hearing her diagnosis and story, Beverly got dialysis training and took her in.

Last year, Elizabeth officially became one of six siblings, who have all been adopted by Beverly.