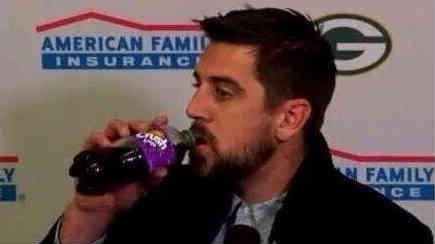 Was Aaron Rodgers sending a message to the Minnesota Vikings when he took a sip of Grape Crush during his post game news conference? Perhaps the better question is; will the move get Rodgers in trouble?

Rodgers casually sipped his Grape Crush soda while answering questions Sunday following the Packers 24-21 victory over Minnesota. Rodgers threw for 209 yards and two touchdowns in the win that was not as easy for Green Bay as many had predicted. Some sports bloggers and Twitter users took notice of Rodgers' beverage choice and declared it a message to the Vikings and their fans.

Message or not, Rodgers' thirst may cost him.  According to a Wall Street Journal report, the NFL has a giant sponsorship deal with PepsiCo to the tune of $2.3 billion, and the NFL doesn't take kindly to players displaying logos or products from companies that haven't paid up. Grape Crush is a product of the Dr. Pepper Snapple Group.

Earlier this season, San Francisco quarterback Colin Kaepernick was fined $10,000 for wearing 'Beats by Dre' headphones during a post game news conference. The league has a sponsorship deal with Bose, a competing headphone maker. So far neither the Green Bay Packers nor the NFL has responded to questions about Rodgers and the news conference.