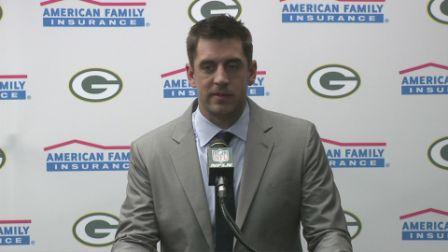 Packers quarterback Aaron Rodgers does not believe he will need to miss any game time following a hamstring injury sustained during the Packers week 8 loss in New Orleans. The Packers fell 23-44 to the Saints in front of a national television audience Sunday night. Rodgers threw for 418 yards and 1 touchdown. He added another score on the ground, but it was his two interceptions that hurt the Packers' chance to pull out a victory on the road.

Rodgers was seen clutching the back of his leg during the third quarter. Coach McCarthy says the injury happened during a scramble play earlier in the game. McCarthy added that he adjusted his game plan at halftime in order to accommodate Rodgers' sore leg, keeping him anchored in the shotgun position most of the game.

After the game Rodgers told reporters he would not miss any time, adding, \"if it would have been real detrimental to my health for the season I would have told [Coach McCarthy] to take me out but I felt like I could still go.\"

McCarthy says he was aware of the injury, but did not worry that leaving his franchise quarterback on the field would risk making things worse. McCarthy told reporters he thought Rodgers played \"smart\" in an effort to avoid further injury. Rodgers did run for a touchdown in the second half.

The injury comes at a fortunate time for the Packers. The team has a buy week scheduled for week 9. The Packers return to action against the Bears at Lambeau Field Sunday, November 9th at 7:30 p.m. CT.