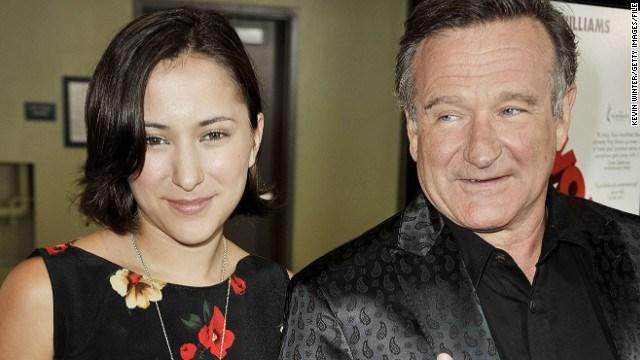 (CNN) -- In the year since beloved comedian and actor Robin Williams took his own life, his daughter, Zelda, has occasionally posted to Instagram to share her feelings about depression and hope.

\"I spent this night shivering and laughing under a clear, cold sky full of stars with people I love just to witness something beautiful,\" wrote the 26-year-old Williams on Saturday, posting a picture of a moon rising over a lake. \"Avoiding fear, sadness or anger is not the same thing as being happy. I live my sadness every day, but I don't resent it anymore.\"

\"And for those suffering from depression, I know how dark and endless that tunnel can feel,\" wrote Williams. \"But if happiness seems impossible to find, please hold on to the possibility of hope, faint though it may be. Because I promise you, there're enough nights under the same yellow moon for all of us to share, no matter how or when you find your way there.\"

Williams killed himself on August 11, 2014, after suffering from depression for many years. He had recently been diagnosed with the early stages of Parkinson's disease, said his widow, Susan Williams.

\"He has been battling severe depression of late,\" his media representative Mara Buxbaum told CNN in 2014. \"This is a tragic and sudden loss.\"

Williams has shared tributes to her late father on Instagram over the past year. In October 2014, she got a hummingbird tattoo on her right hand in honor of him.

Robin Williams won an Oscar for best supporting actor in in \"Good Will Hunting.\" He also starred in movies such as \"Mrs. Doubtfire\" and \"Good Morning, Vietnam.\" His television show, \"Mork and Mindy,\" premiered in 1978 and made him a star.

His three children and his widow, who is the children's stepmother, have been fighting over the terms of his will.