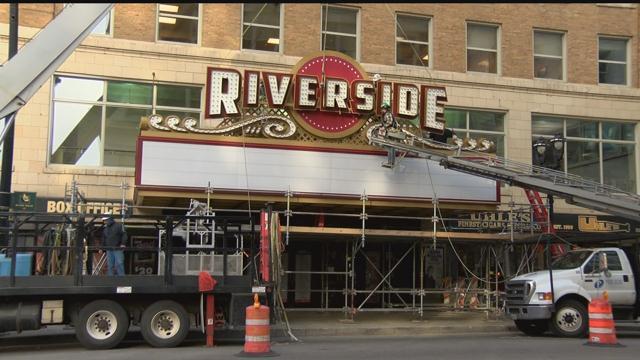 The Riverside Theater in downtown Milwaukee will soon flip the switch and light up its new marquee.

The public is invited to join The Pabst Theater Group on Monday, December 14 as it turns on the new sign for the first time. The unveiling is set for 4:00 PM outside of the Riverside.

CBS 58 was the only station to capture crews Friday morning as they put the marquee's big letters into place. People walking by at the time stopped to take pictures and chat about the change.

The design of the new sign is big and bold, but there’s history behind it too.

"We took iconic pieces of the theater and they're all in this marquee. So everything you see there is taken from something that's iconic within the theater. We brought that outside on Wisconsin Avenue to show Milwaukee,” Andy Nelson, Public Relations Director for The Pabst Theater group explained.

One example is the large red circle in the middle of the sign. That circle is also above the Riverside stage. The new marquee and a 40-foot vertical "blade" sign will give Wisconsin Avenue a fresh look. They’ll also remind everyone who passes by of the Riverside Theater’s rebirth.

"Whether you go to see shows here all the time or you're just visiting from New York, Chicago or L.A., being able to walk down Wisconsin Avenue and know there's this thriving theater with all this history behind it, that's what those signs are going to communicate to visitors,” Nelson said.

Renovations completed at the theater this year include massive plaster work and new carpet, as well as the new marquee. There’s more planned too. In a couple of months, crews will replace all the seats in the balcony.

“We never want it to be plastic and shiny in there. We want it to retain its historic nature and its soul and identity, but updating and keeping it fresh and new for people to use and enjoy is really important to us,” Nelson said.

Wisconsin Avenue right in front of the Riverside Theater will be closed for Monday’s unveiling from 4:00 – 4:30 PM. There will be hot chocolate, Colectivo coffee and beer available. City leaders including Milwaukee Mayor Tom Barrett and Milwaukee County Executive Chris Abele are scheduled to talk.

The Pabst Theater Group is also giving away tickets to upcoming shows to people who attend the unveiling. Those shows include R&B legend Patti LaBelle, “The Dog Whisperer” Cesar Milan, comedians Brian Regan and Gallagher, and folk-rock icon Ani DiFranco, according to Nelson.