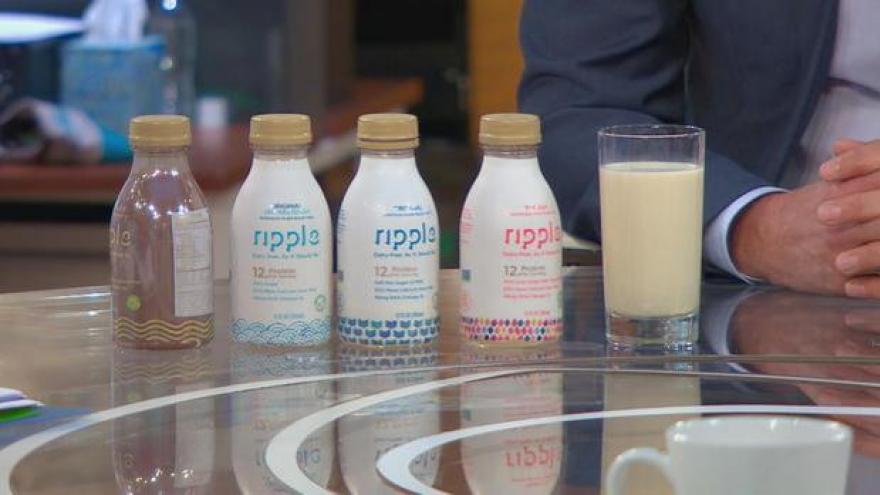 (CBS NEWS) Ripple is a newcomer to the non-dairy market, with the only line of “milk” made from yellow peas. The company claims it’s also unique because it provides as much protein as dairy milk.

“So the current situation is that most dairy alternatives are really bad alternatives to dairy. So a glass of milk has 8 grams of protein in it. Almond milk, which is the most popular non-dairy milk, only has one. Most people think that nut milks would have proteins because they’re from nuts, but they don’t,” Ripple Foods co-founder and CEO Adam Lowry said Thursday on “CBS This Morning.”

Meanwhile, Lowry, who was also co-founder of Method home products, said Ripple has 8 grams of protein per 8 fluid ounces, comparable to milk.

“So we made Ripple to be dairy-free the way it should be, which is a great source of protein, a lot less sugar and really creamy and delicious the way milk should be,” Lowry said.

Alternatives to dairy milk have spiked in popularity over the last several years. U.S. sales of plant-based milks reached nearly $2 billion in 2015. Dairy milk sales have dropped by more than 9 percent since 2011, and the dairy industry is demanding that the FDA define and enforce what is considered “milk.”

In a statement, Chris Galen, the National Milk Producers Federation’s senior vice president of communications, said: “Government standards defining milk are spelled out in the Code of Federal Regulations. Many other common foods also have specific standards that define their composition, to prevent creative marketers from misleading consumers with inferior copycat products. Consumers know that dairy products provide 9 essential nutrients necessary for healthy child development and for adult health. However, the labeling of plant-based alternatives as ‘milk’ conveys a nutritional equivalency that is not accurate.”

However, Lowry said the dairy industry is “playing defense because they’re losing a lot of customers.” He argued that with Ripple, there is nutritional equivalency.

“So on one hand I’m sympathetic to the cause of the dairy industry, which is you’ve got these almond milks out there that are harvesting the halo of that word ‘milk’ unfairly because it’s got one-eighth of the protein, the primary nutritional benefit of milk,” Lowry said.

But no plant-based milk product is calling itself milk without defining what type of plant-based product it is, he said.

Ripple is sold at Target, Whole Foods, Safeway, and Wegmans, among other stores.