In the video, Brooks knocks on the door and says, "Hey I called an Uber, and I'm supposed to be waiting for it over here but I don't know when it's coming. Can you call it for me, please?"

With sirens blaring in the background, Brooks knocked on Daniel Rider's door just minutes after zig-zagging through the parade route. Rider said, "I open the door and I look, and he's like 'I don't have any weapons,' so I looked around and saw he didn't have weapons on him so I said 'ok you can use my phone.'"

Thinking back to a message he'd heard in church, Rider said, "This was my chance to help somebody. I'm going to warm him up and give him some food." Rider gave Brooks his jacket and went to look for slippers for his bare feet. He even made him a sandwich.

Brooks sat on Rider's couch and borrowed his phone to call his mother, so Rider never got alerts to shelter in place or messages about a suspect on the loose. He had no idea what had happened, or who he was speaking with face-to-face.

Rider said, "He was telling me 'Oh is there something going on downtown?' I was like, 'there's a parade today, I know.' And he's like 'Oh that's probably what it was, a parade.' So he was completely putting on a face and lying about everything."

But no Uber came, and then Rider noticed a police car driving up and down the street. He told Brooks to leave, which he did. Police were already closing in.

The doorbell cam video shows Brooks back on the porch while officers yell "Hands up! Hands where I can see them! Hands up!"

After the arrest, the officers asked Rider, "Did you know this guy?" He said, "Absolutely not."

Moments earlier Joy Dunst was near the end of the parade route a few blocks away. She said, "You start hearing screaming, then you're hearing people crying. We couldn't figure out at first what was going on."

As she and her husband left, they heard bits and pieces about what happened, then saw police surrounding a driveway. Dunst said, "Here was the SUV that had the bullet hole, the smashed front." 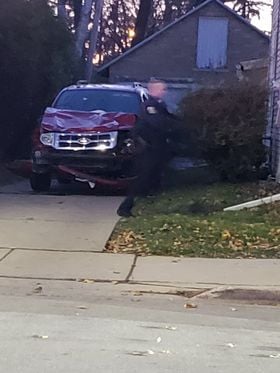 She says she shared the photo right away because she didn't want anyone to fear there was still a threat. "If this helps expedite the process and helps get justice for the victims, it definitely feels even better."

Joy says friends of friends were in the parade, and one had a child marching with the band that was inches away from being hit. She says many people are still traumatized.