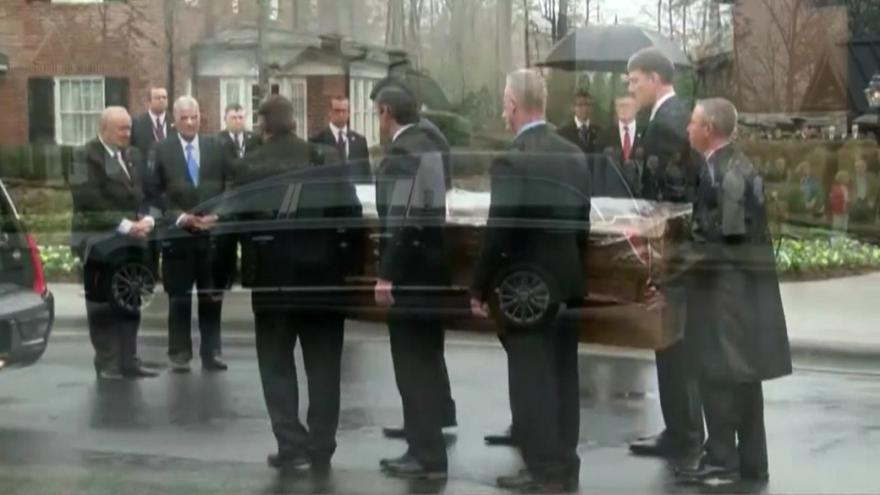 CHARLOTTE, N.C. (CBS NEWS) — The Rev. Billy Graham's five adult children and some of his favorite singers were preparing to offer memories, hymns and prayers at a funeral Friday that marks the culmination of more than a week of tributes to "America's Pastor."

Mourners were already taking their seats hours before the scheduled noon start time of the service in a tent on the grounds of Graham's library in Charlotte. The invitation-only crowd of about 2,000 includes President Donald Trump and Vice President Mike Pence. The Trumps arrived in Charlotte shortly after 11 a.m. ET.

Neither Pence nor Trump are scheduled to speak during the service, but they met privately with the Graham family beforehand.

The Rev. Franklin Graham will deliver the main funeral address for his father after shorter messages from Billy Graham's three daughters and younger son.

The funeral planning began a decade ago with Billy Graham himself, and it also reflects his family's desire to capture the feeling of the crusades that made him the world's best-known Protestant preacher of his era.

"His fingerprints are on this service for sure," family spokesman Mark DeMoss said in a phone interview. "The Graham family has long considered that his funeral eventually would really be his last crusade."

Rain fell and cameras clicked as a military honor guard carried the casket of the late Rev. Billy Graham from the U.S. Capitol to a waiting hearse outside. (Mar. 1)

Graham, who died last week at age 99, brought a message of salvation to millions during visits and live broadcasts to scores of countries.

The service features songs from gospel musicians who performed at Graham's events: Linda McCrary-Fisher, Michael W. Smith and the Gaither Vocal Band. They are all friends who sang for Graham at his home in recent years, DeMoss said.

Other notable guests are expected to include North Carolina Gov. Roy Cooper. His immediate predecessor, Pat McCrory, was already in the tent hours before the service and doing commentary for a radio station.

Afterward, Billy Graham will be buried next to his wife in a memorial prayer garden at the library, with his grandchildren serving as pallbearers. His pine plywood casket was made by inmates at the Louisiana State Penitentiary at Angola. The grave marker reads: "Preacher of the Gospel of the Lord Jesus Christ."

The funeral serves as the culmination of more than a week of tributes that included crowds lining the road for a procession from his home in the mountains to Charlotte, where Graham grew up. Approximately 13,000 people — including former presidents George W. Bush and Bill Clinton — filed past his casket during a public viewing in Charlotte this week. And on Wednesday, Graham became the first private citizen since civil rights icon Rosa Parks in 2005 to lie in honor at the Capitol Rotunda in Washington.