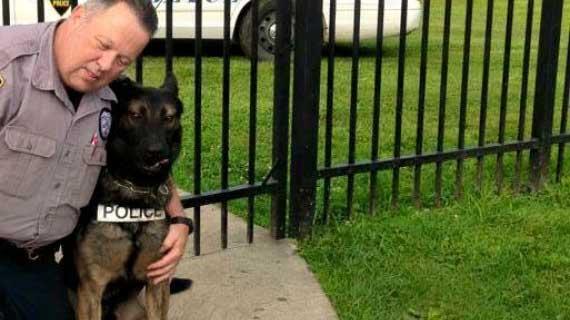 (CNN)A police officer in Marietta, Ohio, was hoping his K-9 partner would join him in retirement, but the city says it may not work out that way.

Officer Mathew Hickey developed a close bond with his police dog, Ajax, and the two were together every day for the past three years. When Hickey retired from the force after 30 years of service, he tried to buy the dog from the city for $3,500.

"Ajax is a family member; he's one of my children," Hickey told CNN affiliate WBNS.

He's also city property and could probably work for another five or six years. That means that under Ohio law, Ajax must be sold at auction.

"The dog is a property of the city of Marietta. Because it is a piece of personal property, it is treated just like if it was a shovel ... that's just how it is," Paul Bertram III, city law director, told WBNS. "I don't know that anyone in the city of Marietta wants that to happen."

The city says it can only sell Ajax to current or former police officers or someone who trains police dogs, but Hickey is still worried.

"I'm afraid somebody might take the dog and auction way high, of course, over my head," Hickey said.

Marietta Mayor Joe Williams sympathizes with Hickey. "I would be happy for him to get the dog. But I can't because the law states I can't," he told CNN. "As a public official, I swore I would uphold the Constitution of the United States, the Constitution of Ohio, and the laws of Marietta."

Ajax is living with Hickey until the situation is resolved, and they've gotten a lot of support from the community.

The city's Facebook page has been flooded with comments in favor of letting Hickey keep Ajax.

Hickey says the situation has changed him. "I kind of retired wanting to be a hermit and left alone because I worked the midnight shift since '96 and I was jaded, but now I am a changed man because of the support," he told CNN.

Corey Orr, who set up the campaign, told CNN he "expected a few thousand (dollars in donations) but nothing like this."

Orr said the donations started trickling in locally but now he is getting money from Canada, Australia and even the United Kingdom. Any excess money will go to charities and organizations that work with police dogs.

The auction date will be set on Thursday's council meeting, according to Williams.