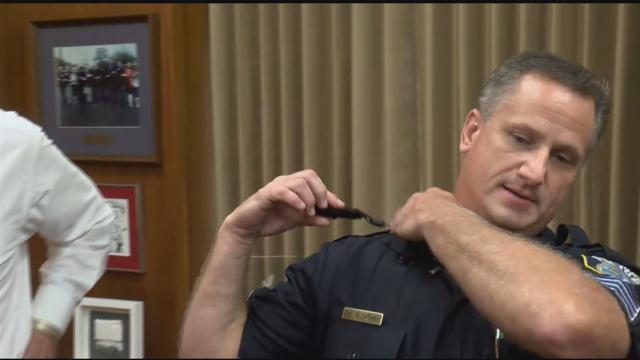 Milwaukee Police will have discretion to turn off body cameras if a victim or witness requests they not be recorded while giving a statement.

\"The best practice across the nation is if you're going to turn it off, you need to get the person on camera saying I would like you to shut that off and then they have to articulate I'm conducting a sexual assault investigation, the victim has requested I turn the camera off, I'm now turning the camera off,” Milwaukee Police Inspector Mary Hoerig said.

This past weekend, Mayor Tom Barrett proposed to deploy 1200 body cameras by the end of 2016.

This proposal will be included in Mayor Barrett’s 2016 budget which is totaled at 318 million dollars.

The 12-page body camera policy went before the City’s Fire and Police Commission Thursday evening for an initial review, making the first chance for public discussion about it.

The proposed policy also prohibits the cameras from being used to secretly record conversations of the public and other police officers.

Officers also are not allowed to record in a place where reasonable expectation of privacy exists, such as locker rooms and restrooms.

Milwaukee Police told the media the department drafted polices after consulting with the Police Executive Research Forum, International Association of Chiefs of Police, and the American Civil Liberties Union and Milwaukee beat officers, according to Captain Mark Stanmeyer with the MPD.

The department also consulted with 13 law enforcement agencies from Kansas, Virginia, California, Texas, Arizona, Florida, Ohio, and Wisconsin, according to the MPD.

The body cameras will be worn at shoulder or eye level, with or without glasses.

The MPD said it looked at chest cameras, but said if an officer had to raise their weapon, the view would be blocked.

Some Milwaukee residents voiced their concerns at Thursday’s Fire and Police Commission meeting at City Hall.

\"Initially it was stated the videos could not be altered and then it was stated that they could be altered in the way of fussing out someone's face or changing their voice,” one Milwaukee resident said. “Is that the limitation of the alteration?\"

\"Is there something, a penalty or some disciplinary action when an officer doesn't turn a camera on in a timely fashion,” one Milwaukee resident asked.

Milwaukee Police say the body camera policy is a work in progress, and it could take up to a year in order to make the necessary adjustments.

The total 1200 body cameras will be assigned to Milwaukee Police Officers by the end of 2016.

The fire and police commission plans to hold another public meeting for residents to give their input.

That meeting has not been scheduled yet.

The police body camera policy is detailed in 12 pages.

There is a link to read the full policy on this page: