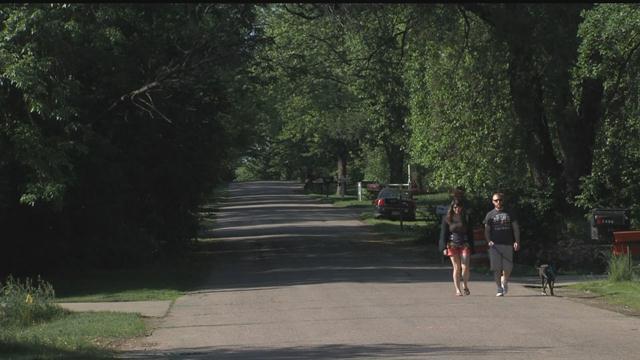 Some Racine County residents are concerned after finding out road repairs on their street could take down nearly 100 trees.

Residents we spOKe with say there's no denying Green Haze Avenue does need to be repaired but they say cutting down that many trees will totally change their neighborhood.

"Whether it's in the summer when the leaves are coming in and even in the winter when snow clings to the branches. Its a special place and you almost don't realize you're in the city," said resident Chris Gittens.

Six months ago Gittens moved back to Racine with his family and fell in love with Green Haze Avenue.

Debbie Trabert couldn't agree more. She's lived on the street for nearly thirty years and says people come from across the county to take in it's beauty.

"Hard to believe but its fun to watch. They park their cars and they take pictures its really something to see," she said.

But both residents say a reconstruction project expected to happen this summer will change all of that.

Gittens says the village told him the plan is to widen the road and bring it up to code, thereby eliminating the flooding issues that some of his neighbors deal with. So, he was ok with trees coming down, but not this many trees.

"When the trees were marked a few weeks ago we've counted anywhere from 70-80 trees lost which is 2-3 times more than what residents originally agreed to," he said.

Everyone we spoke with agrees the road needs work, but hopes they can work with the village to come up with a compromise.

"It attracts people for jogging and walking their dog. It will take away the park look because there are so many trees. Its going to lose something with all the trees going down," she said.

"They are just trees but they create the unique character that makes it rather special in the community. Even after work is done and planting starts again  it will be 100 years before we see something like this again," said Gittens.

Wednesday residents plan to meet with village officials. Meanwhile, we did hear back from Village President Jerry Garski, but were unable to do an interview with him before deadline.