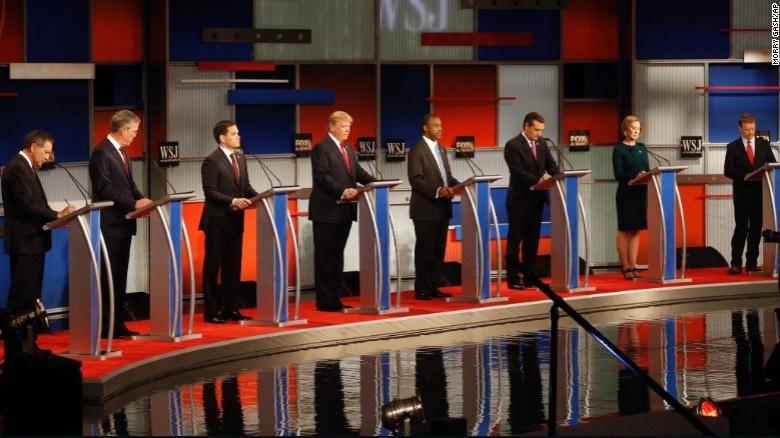 (CBS NEWS) Republicans debated on immigration, taxes and much more in Milwaukee on November 10.

Paul: I am the only fiscal conservative on the stage because I am the only one who wants to limit spending in all areas, including the military.

Kasich: The conservative movement will send power, money and influence back to Americans so they can run the country from the bottom up.

Fiorina: A Clinton presidency would be a disaster where the military would deteriorate, veterans would not be cared for, the rich will get richer, the poor will get poorer and the character of the nation will be corroded.

Bush: America doesn't need an agitator in chief or divider in chief, it needs a commander in chief who will restore the military and fix a broken Veterans' Administration.

Cruz: America is in crisis, but if the country can get back to free-market principles and constitutional liberties the country will be turned around. Conservatives should heed Reagan's model of painting in bold colors and not pastels.

Rubio: If there is another Democratic administration, the American ideal of each generation being better off than the last will cease to be true. Standing by the principles of limited government and free enterprise to today's issues will expand the American dream.

Carson: In the two hours of the debate, people have continued to die from drug-related causes, suicide and abortion, and a million dollars was added to the national debt. The American people can change that narrative.

Trump: I have had great business success, I am funding my own campaign, and if I win the country will be even more special and better off than ever before.

11:06 p.m. Paul gets a question about whether its possible to continue the American energy boom and move toward energy self-sufficiency while pursuing a meaningful climate-change program. He said he would promise to repeal regulations hampering energy production.

"While I do think man may have a role in our climate, I think that nature also has a role...we need to look before we leap," he said.

He siad Mr. Obama has "devastated" the state of Kentucky and even the Democratic Party there because no one wants to associate with him.

10:52 p.m. Cruz continued his answer by affirming he would not bail out Bank of America and said instead, he would force the Fed to keep money tied to a stable level of gold and serve as a lender of last resort.

Kasich objected to his perspective.

"When a bank is getting ready to go under...you just don't say we believe in philosophical concerns. You know what an executive has to decide," he said. "Philosophy doesn't work when you run something...on-the-job training for president of the United States doesn't work."

10:47 p.m. Cruz said he would "absolutely not" bail out the big banks again. He argued that Republicans are not the party of the rich because it was Dodd-Frank legislation, passed by a Democratic Congress and president, that made the banks so large.

10:45 p.m. On a question about whether he would break up the big banks, Carson veers hard into a critique of regulations and said an environment with fewer regulations was what allowed the U.S. to grow so quickly after its founding.

Pressed over his positions on breaking up the banks again, he said, "I would have policies that wouldn't allow that to occur. I don't want to go in and tear anybody down, I mean that doesn't help us, but what does help us is to stop tinkering around the edges and fix the problem."

Rubio jumped in to back him up.

"The government made them big by adding thousands and thousands of pages of regulations," he said, arguing that the Dodd-Frank legislation codified the idea of banks being too big to fail.

Kasich jumps in with a different perspective: There is too much greed in the system.

10:31 p.m. Paul goes after Fiorina for saying she would stop talking to Putin.

After Fiorina chimed in by arguing that former President Ronald Reagan once walked away from a summit in Reykjavik, Iceland, Trump wondered aloud, "Why does she keep interrupting everybody?"

Paul also railed against his fellow Republicans for supporting a no-fly zone in Syria, saying that strategy will lead to another war in Iraq and saying they also want to arm allies of al Qaeda.

10:25 p.m. "If Putin wants to go and knock the hell out of ISIS I am all for it, 100% and I can't understand how anyone is against it," Trump said in regards to how he would handle Putin's increasing presence in the Middle East. On Russia's incursion into Ukraine, he asked, "Why are we always doing the work?" He suggested the other countries that border Ukraine do more.

"We can't continue to be the policemen of the world," he said.

Fiorina argues that she would not speak to Putin and talks about rebuilding the Sixth Fleet and missile defense system in Poland. She also argued for providing more arms and intelligence to Arab allies in the Middle East.

"Putting the special ops people in there is better than not having them there," he said. He went on to talk about the need to make the Islamic State of Iraq and Syria "look like losers" and suggested the U.S. could easily recapture an energy field in Iraq.

10:12 p.m. Asked about objections to specific parts of Trans-Pacific Partnership, Trump rails against the fact that that the agreement does not address currency manipulation by China.

"Hey Gerard," Paul calls out to the executive editor of the Wall Street Journal, Gerard Baker, who asked the question, "We might want to point out that China's not part of this deal."

10:06 p.m. Rubio and Paul get into an argument when Paul questions the amount Rubio would spend on national defense.

"I know that Rand is a committed isolationist. I am not. I believe the world is a stronger place when the United States has the strongest military in the world," Rubio said.

"I do not think we are any safer from bankruptcy court as we go further and further into debt we become less and less safe. This is the most important thing we're going ot talk about tonight. Can you be a conservative and be liberal on military spending?...I want a strong national defense but I don't want us to be bankrupt," Paul replied.

10:01 p.m. Cruz appears to fall into the same trap that ensnared former Texas Gov. Rick Perry when he tried to list the three agencies he would cut during the 2012 debate and forgot one.

9:53 p.m. Carson explains the thinking behind his 15 percent flat tax proposal, which he likened to tithing.

Whose plan would God endorse?

"Everybody should pay the same proportion of what they make...I don't see how anything gets a whole lot fairer than that," he said. He would also get rid of deductions, including the mortgage interest deduction and charitable giving deduction, and argued that they would not hurt home ownership or charitable giving.

"The fact of the matter is people had homes before 1913 when we introduced the federal income tax and later after that started deductions...I believe if you put more money in people's pockets that they will actually be more generous than less generous," he said.

He also said there would be rebates for people "at the poverty level" in his tax plan, but said that his economic plan would create more job opportunities for people.

"Health insurance has always been a cozy little game between regulators and health insurance companies. We need to try the free market, the free market where people actually have to compete," she said. She also said the government should require healthcare providers to publish its costs and outcomes to give more information to patients.

She said the alternative to the law is to allow states to manage high-risk pools for those who need help with health care.

9:41 p.m. Cruz gets a question about Social Security but quickly pivots back to immigration.

"When the mainstream media covers immigration it doesn't often see it as an economic issue...the politics of it would be very very different if a bunch of lawyers or bankers were crossing the Rio Grande." The same is true if there were journalists immigrating here and driving down wages in the press, he said.

9:39 p.m. Rubio points to an "outdated" higher education system that is too expensive and not teaching the right skills as one of the reasons there are not enough good jobs available in the economy.

9:36 p.m. The first real tussle of the debate is between Kasich and Trump on illegal immigration. Kasich charges that Trump doesn't understand where jobs in the economy are created.

9:33 p.m. Trump deflects a question about whether deporting millions of immigrants would affect the economy.

Kasich weighs in saying he would allow law-abiding citizens to stay.

"Come on folks, we all know you can't pick them up and ship them back across the border, it's a silly argument," he said.

9:30 p.m. Carson is asked whether the slew of stories questioning inconsistencies in his biography is hurting his campaign.

"First of all thank you for not asking me what I said in the 10th grade, I appreciate that...the fact of the matter is we should vet all candidates. I have no problem with being vetted. What I do have a problem with is being lied about," he said, before turning his answer to Clinton and Benghazi.

He said people who know him know he's an honest person.

9:20 p.m. Bush calls for repealing every single regulation put into place during President Obama's administration and starting over, even on issues like internet regulation and coal.

9:14 p.m. Asked about cutting the budget, Kasich criticized Democrats for promising to much on the spending side. But, he cautioned Republicans, "we've got to be responsible for what we promise on the tax side."

9:11 p.m. Rubio argues, "If you raise the minimum age you're going to make people more expensive than a machine...Here's the best way to raise wages: Make America the best place in the world to start a business." He talked about repealing Obamacare, increasing U.S. energy resources and making vocational training more widely available and attractive.

9:06 p.m. The first question goes to Trump: Would you raise the minimum wage to $15 an hour, as protesters across the country are demanding?

"I can't be," Trump said. "We are a country that is being beaten on every front economically, militarily. There is nothing we do now to win."

Sen. Lindsey Graham of South Carolina and former New York Gov. George Pataki, who participated in previous undercard debates, were bumped entirely from the Fox Business debate lineup because they had less than 1 percent support in the polls.

Graham will be weighing in during the debate on an app called Sidewire, which bills itself as a mobile-based social platform. The Wall Street Journal notes that posting on Sidewire "is limited to about 300 'newsmakers.'" App users will be able to see Graham's running commentary, but only those newsmakers will be able to ask Graham questions.