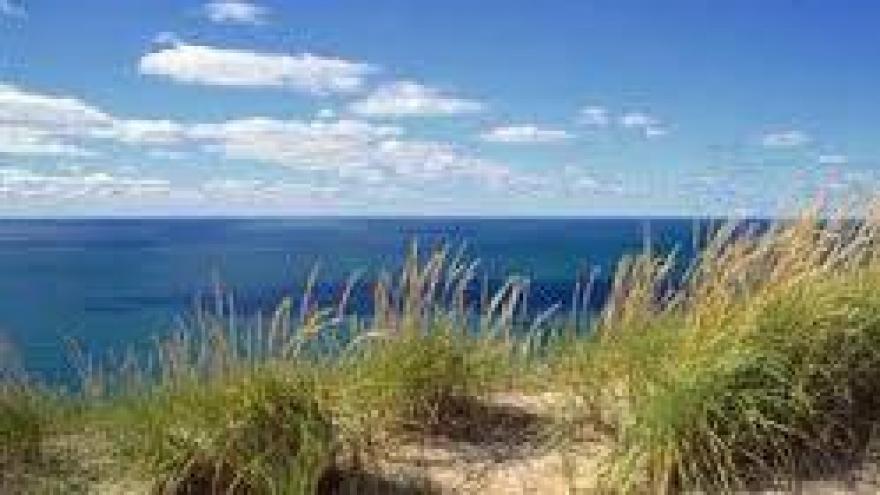 By JOHN FLESHER, AP Environmental Writer
TRAVERSE CITY, Mich. (AP) — It sounds like an idea that would warm a conservative Republican's heart: Kill funding of a regional environmental cleanup that has lasted seven years and cost the federal government more than $2 billion, with no end in sight. If states want to keep the program going, let them pick up the tab.
That is what President Donald Trump's 2018 budget plan proposes for the Great Lakes Restoration Initiative, an ambitious push to fix problems that have long bedeviled the world's largest surface freshwater system — from invasive species to algal blooms and toxic sludge fouling tributary rivers.
During the Obama administration, the program generally got about $300 million a year. Trump's offer is zero. His spending plan released Thursday says it "returns the responsibility for funding local environmental efforts and programs to state and local entities, allowing EPA to focus on its highest national priorities."
The response from Republicans in Great Lakes states: No, thanks.
"I think it makes sense for us to continue to make prudent investments in protecting and improving the Great Lakes," Wisconsin Gov. Scott Walker told The Associated Press, adding that he would lobby the Trump administration and congressional leaders to put the money back.
Gov. Rick Snyder of Michigan considers Great Lakes funding "very important to Michiganders, therefore we know there is strong support among Michigan's congressional delegation and we will work with them to preserve the funding," spokeswoman Anna Heaton said.
GOP lawmakers from the region also rushed out statements defending the program. It "helps protect both our environment and our economy," U.S. Sen. Rob Portman of Ohio said.
The reaction illustrates a political fact of life: Whether you consider something in the budget valuable or wasteful can depend a lot on where you're from.
And it underscores the resistance Trump may encounter to some spending cuts he is proposing for the Environmental Protection Agency, the Department of Interior and other agencies that draw frequent attacks from congressional Republicans yet fund projects and services with support back home.
The president's spending blueprint also targets a Chesapeake Bay cleanup begun in 1983 that received $73 million last year, plus other "geographic programs." It doesn't identify them, but a proposal by the Office of Management and Budget this month called for cutting all or most funding for San Francisco Bay, Puget Sound and the Gulf of Mexico.
Asked for more details, EPA released a statement saying the plan "reflects the president's priorities" and that Administrator Scott Pruitt "is committed to leading the EPA in a more effective, more focused, less costly way as we partner with states to fulfill the agency's core mission."
The Great Lakes region includes swing states crucial to Trump's election — Michigan, Ohio, Pennsylvania, Wisconsin. There's also New York, Minnesota and Illinois. And Indiana, whose former governor, Mike Pence, is now Trump's vice president.
Coincidentally, the budget plan was released as about 100 Great Lakes advocates paid a yearly visit to Washington, D.C., in support of the restoration initiative. They flocked to the offices of home-state lawmakers, reminding them that Congress voted only last year to extend the program another five years.
"We are going to turn once again to our bipartisan congressional champions," said Todd Ambs, director of the Healing Our Waters-Great Lakes Coalition.
While Democratic lawmakers excoriated Trump's proposal — "incredibly short-sighted and reckless," said Rep. Dan Kildee of Michigan — Republicans noted that former President Barack Obama at times recommended more modest reductions to the initiative, which Congress rejected.
Some also pointed out that former President George W. Bush signed initial legislation authorizing a wide-ranging Great Lakes cleanup, although he sought little money for it.
The initiative has funded nearly 3,000 projects across the eight states. Among them: efforts to prevent Asian carp from invading the lakes, prevent nutrient runoff that feeds harmful algal blooms, rebuild wetlands where fish spawn and remove sediments laced with PCBs and other toxins.
Nearly all the federal grants require cost-share payments from a state, local or tribal agency, or perhaps a nonprofit organization. But Ambs said they can't afford to shoulder the burden alone.
Without federal support, "all of this restoration work would come to a halt," he said.
___
Contributing to this story were Associated Press reporters Scott Bauer in Madison, Wisconsin; David Eggert in Lansing, Michigan; and Sarah Rankin in Richmond, Va.