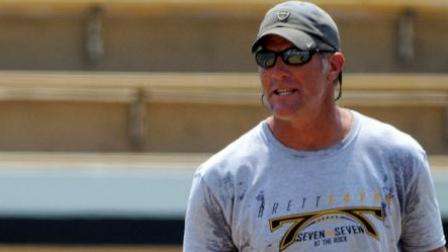 Green Bay got a couple of inches of snow this morning during rush hour. Plows and salt trucks hit the streets early, and by game time, it was melting away.But it wasn't only snow people were looking out for in Green Bay.

Brett Favre made a stop in town just hours before the Green Bay Packers kicked off against the Atlanta Falcons. Before you get your hopes up, he wasn't in Green Bay for the game. Favre attended a charity event at his restaurant. He took his flight back to Mississippi this afternoon well before the game started.

Brett Favre is scheduled to be inducted into the Packers Hall of Fame in 2015. He's the only inductee for the year making it the sixth time in the organization's history that only one player was inducted. Favre has said he's honored to have his name enshrined with the likes of Bart Starr and his former teammate Reggie White.

Favre won three MVP awards and a Super Bowl before Ted Thompson traded him to the New York Jets in 2008 following two off-seasons of indecision on Favre's part about his future in football.