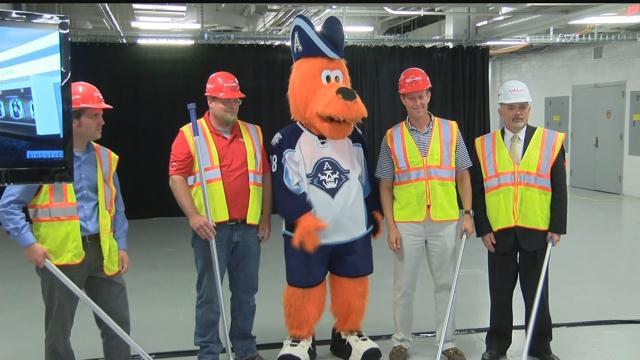 A Milwaukee sports venue with decades of history is getting a new resident and some upgrades.

Arena officials today called this a homecoming for the Milwaukee Admirals.

In advance of the next Admirals season, a number of renovations will take place here at UWM Panther Arena.

The changes were announced today during a ceremonial groundbreaking with the higher ups from the organization.

There will be upgrades made to concession stands, the arena seats and led lighting, just to name a few.

The keystone for the project is the new Admirals locker room.

A rendering shows it is rounded in shape. Officials called it NHL Caliber.

Admirals CEO Harris Turer said the community has been tremendously supportive of the arena switch, and he is certain the changes will attract a new crowd.

"They have accepted this idea of our move over and during this time People have stepped up and not only expanded on their season tickets but we've seen a renewed interest in admirals hockey from a season ticket perspective and the growth has been tremendous and were very fortunate the community has bought in to the admirals move here,” said Harris Turer, Milwaukee Admirals CEO.

A representative for the Admirals said some ticket prices will go up but some will also go down.

The cheapest seat at the new arena will be $15.