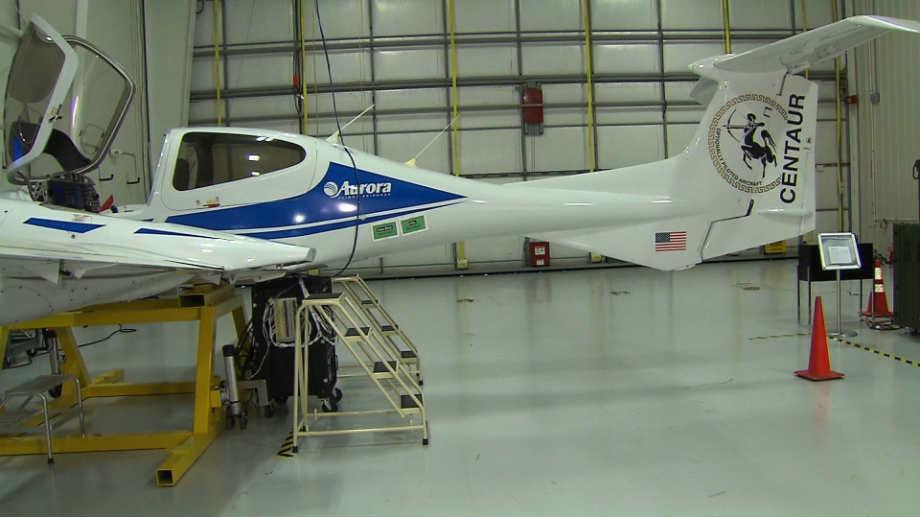 (CNN) -- Little drones flying overhead are one thing. A much larger, unmanned, four-seater airplane is another.

You may not have heard about it, but a 4,100-pound twin-propeller experimental airplane called the Centaur was flight-tested this month at a Federal Aviation Administration-designated site in Rome, New York.

The Centaur flew with no pilot in the cockpit, becoming the first large-scale fixed wing aircraft to fly at an FAA-approved test site, according to Aurora Flight Sciences Corp., which makes the Centaur.

It represents an important new step toward airplanes without pilots in the cockpit being able to fly in the nation's commercial airspace.

Currently, the FAA limits large unmanned planes to special military or civilian test zones. But the popularity of drones and other remote-controlled aircraft is prompting officials to write new regulations for this kind of emerging technology.

Aurora calls Centaur an \"optionally piloted aircraft\" because it can be piloted in the cockpit or by remote control. When a pilot is operating it inside the cockpit, the aircraft is perfectly legal to fly around the U.S. like any other small passenger plane.

It's marketed as a cheaper way for pipeline operators or mining companies to survey their property. But if CEO John Langford has his way, people will be riding in them too.

\"I'm a huge believer that the unmanned airplane revolution will make aviation safer for everybody,\" he told CNN. \"That isn't to say there won't be accidents, but the overall level of safety will go up as the robotic stuff is introduced.\"

For many Americans, the idea of 30-foot-long remote-controlled airplanes flying overhead might take some getting used to.

Between now and then the FAA will have to develop new regulations for these remote-controlled planes. Engineers will have to perfect collision avoidance technology that will prevent crashes.

FAA Deputy Administrator Michael Whitaker told a House committee this month that \"very robust\" technologies are being tested which \"will allow the vehicles to stay clear from humans and other vehicles. We just need to make sure that technology is robust enough to incorporate into our air system.\"

The Centaur looks a lot like any other general aviation plane, with two propellers, three wheels, two passenger seats and two cockpit seats for pilots to sit in. It can fly as high as 27,500 feet and as far as 2,300 miles when it has a 200-pound payload. Top speed: about 200 mph. In just four hours, it can be converted from remote-control mode into a more traditional plane that will only fly if there's a pilot in the cockpit.

But unlike typical private planes at your local executive airport, the Centaur is outfitted with gear that allows a pilot to fly it from the ground, using not much more than a laptop computer and a satellite or radio link.

In company video showing the June 12-15 test in Rome, you can see equipment in the cockpit controlling the yoke, which normally would be handled by a pilot.

Aurora Flight Sciences is no stranger to drone technology. The company had a big hand in developing the U.S. military's Global Hawk high-altitude unmanned spy plane.

Earlier in his career, Langford, an MIT grad, interned at the White House Office of Science and Technology Policy and worked as a Lockheed engineer helping to develop the F-117 Nighthawk stealth fighter jet.

And as scary as it is to think about, you have to ask: How hard would it be for bad guys to get hold of a Centaur and do God-knows-what?

\"Secure networks are made by humans, so they're not totally 100% perfect,\" Langford acknowledged. \"You deal with it the same way you deal with all secure networks, which is, they have to be protected and there's a high degree of encryption.\"

Will remote-controlled small passenger planes lead to jetliners with no pilots in the cockpit? \"I don't think we'll ever see that in our lifetime,\" Langford said. \"I think the big commercial operations will continue to be done by professionals.\"

However, he said we may see something like Uber in the sky for short-distance travelers trained as \"operators\" -- but not as highly skilled as today's licensed pilots.

\"If we want to go someplace, you'll have an app like Uber,\" he said. \"The plane can come to you. Nobody's on board. It doesn't need a pilot. You're a trained operator.\"

This scenario would lead to a huge increase in commercial flying, he said. Clearly it would fundamentally change many things about the way we travel and how we view the aviation industry.

Final commercial regulations for small unmanned aircraft systems will be in place \"hopefully before June 17\" of next year, the FAA's Whitaker said. But those rules will only apply to aircraft under 55 pounds -- what are commonly called \"drones.\" For larger unmanned aircraft, he said the FAA has only recently started the rule-making process.

Whitaker hinted that a pilot on the ground would not be allowed to control multiple large unmanned aircraft simultaneously. \"If it's a large aircraft, certainly there will be one [pilot] per aircraft,\" he said.

With so many variables and stakeholders, routinely flying large commercial unmanned airplanes in the nation's airspace within five to seven years seems very optimistic.

For now, the focus will remain on testing, Langford said. Aurora Flight Sciences continues to use the FAA-designated site to gather data on Centaur that might be used to develop collision avoidance rules and systems.

The Swiss Air Force, Langford said, has also been testing Centaur to learn more about how to merge unmanned airplanes into its own national airspace system.

It's all part of a deliberate process, he said. \"Baby steps, so that the safety level stays at least as high as it is today. But the goal is to make the whole aviation system even safer.\"