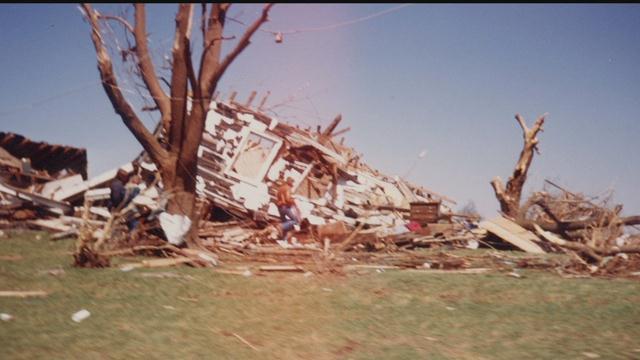 32 years ago, right now, the small community of Wales was cleaning up after a huge tornado. It is considered one of the strongest to hit the area, and the memories of April 27, 1984 are still on the minds of many people. At that time, the storm was rated an F4. The more than 200 mile per hour winds uprooted trees, and lives. It spiraled northeast through Wales and other small Waukesha County villages before dissipating.

"It's really vivid in my memory," said Don Pedek.

Pedek said he was driving with his wife and son when he heard about the tornado. They were in Illinois, while his daughter was at home in Wales, in the storm's path.

"It was pretty severe, it really was close by here," Pedek recalled. "There was one home that the roof was tore off and the garage was all collapsed."

His daughter, and his home, survived the storm. Mary Ramstack now lives on a farm that was heavily damaged by the storm, including a silo that is still standing.

"The top went off, ya know, I'm surprised the whole thing didn't go down," Ramstack said. "But, we're thankful for it not. It needs to be painted, but it's just something, it's something that we wouldn't want to tear down (cuz) it's a memory."

One person died in the storm, more than a dozen others got hurt.