Refugees Arrested on Terror-Related Charges Communicated with Each Other 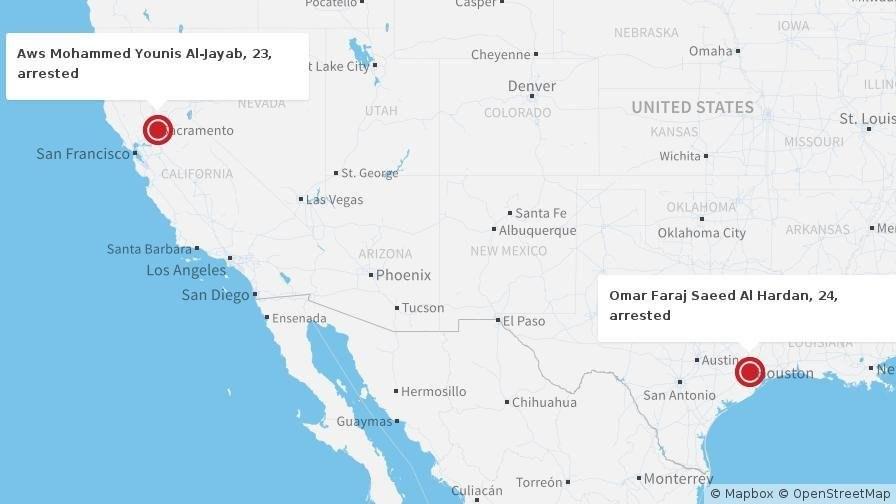 Federal authorities have arrested two refugees on terror-related charges. The two men had communicated with each other, a law enforcement official told CNN.

Both men were Palestinians born in Iraq and living as refugees in the United States, according to the U.S. Justice Department. And both of them are accused of lying to immigration officials about their alleged ties to terrorist organizations.

Citing social media communications, the criminal complaint against Jayab said he spoke with an unnamed Texas resident about weapons and training in Syria. That unnamed individual is Hardan, according to the law enforcement source.

"I need to learn from your weapon expertise," the individual wrote to Jayab, according to the complaint.

In his reply, Jayab wrote, "We will make your abilities very strong," according to authorities.

"Our concern now is only to arrive there," Jayab went on. "When you arrive to al-Sham [Syria] you will be trained."

It was not immediately clear whether Hardan or Jayab had retained legal representation. They are both scheduled to appear in court Friday.

The two cases come as some Americans worry that terrorists could enter the United States posing as refugees from war-torn nations.

That concern was amplified after the Paris terror attacks in November. ISIS claimed responsibility for those coordinated attacks on a concert hall, bars, restaurants and a sports stadium that killed 130 people.

After news of Hardan's and Jayab's arrests Thursday, Sen. Ted Cruz, a Republican presidential candidate, reiterated his views that the United States should not accept refugees from Syria and called for a "systematic and careful retroactive assessment" to determine whether or not refugees already in the United States have ties to terrorists.

"I commend the law enforcement for apprehending these two individuals, but their apprehensions raise the immediate question: Who else is there? What are they planning next?" Cruz said.

Hardan entered the United States as an Iraqi refugee in November 2009 and was granted legal permanent resident status in August 2011, the Justice Department said.

In addition to the charge of attempting to provide material support to ISIS, he's charged with procurement of citizenship or naturalization unlawfully and making false statements.

A federal grand jury indictment unsealed Thursday alleges he attempted to provide material support and resources, including training, expert advice and assistance, to ISIS. The indictment does not provide details about the evidence behind the allegations.

The indictment also alleges he lied in his citizenship application, saying he had no ties to a terrorist organization when he'd associated with members and sympathizers of ISIS throughout 2014, according to the Justice Department.

Jayab entered the United States as an Iraqi refugee in October 2012, the Justice Department said.

According to a criminal complaint filed in federal court, Jayab exchanged messages on social media in 2012 and 2013, saying he planned to go to Syria to fight.

In November 2013, the complaint alleges, he flew from Chicago to Turkey, then traveled to Syria. Between November 2013 and January 2014, he "allegedly reported on social media that he was in Syria fighting with various terror organizations, including Ansar al-Islam," officials said.

Asked about his travel in an interview with U.S. Citizenship and Immigration Services, Jayab allegedly said he had traveled to Turkey to visit his grandmother and denied he had been a member of any rebel group or militia.

In a written statement, U.S. Attorney Benjamin Wagner said there were no signs that Jayab was involved in any U.S. terror plots.

"While he represented a potential safety threat, there is no indication that he planned any acts of terrorism in this country," Wagner said.

If convicted, he faces a maximum penalty of eight years in prison and a $250,000 fine.