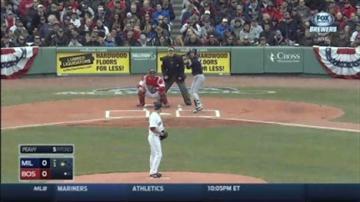 MILWAUKEE-- Boos at Fenway Park as Brewers slugger Ryan Braun stepped onto the field for his first away game.

The \"welcome\" Red Sox Fans save Braun was a discussion topic on Sports Radio 1250 AM after the game.

The greeting was a stark contrast from the standing ovation fans gave Braun on Opening Day after returning from suspension.

Many outside Milwaukee are now wondering what local fans are thinking, Braun didn't just get caught using performance enhancing drugs, he lied about it over a long period of time, and tried to throw a local man under the bus in the process.

\"It's not unexpected,\" said one caller to Sports Radio 1250 AM, \"and it's going to get worse when he gets to Philly or Chicago and stuff, but he can handle it.\"