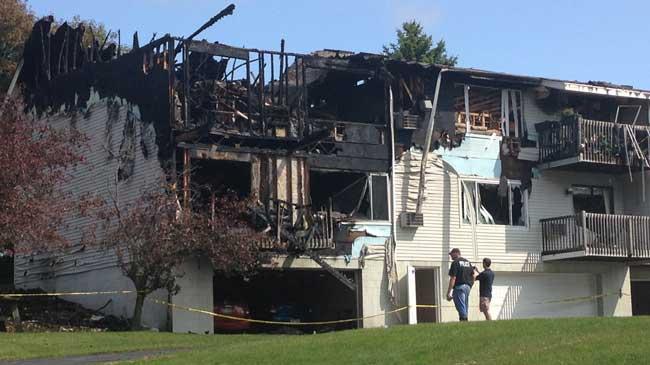 Red Cross and Pewaukee Police Department are on the scene of a building fire that impacted approximately 30 residents.

The Village of Pewaukee Police Department is investigating a fire that took place at an 8-unit apartment building overnight. Numerous 911 calls were made to Waukesha County Communications dispatch center shortly before 1:00am on Friday morning. Officers were immediately dispatched to the apartment building at 1302 Sunnyridge Road, and arrived on scene within minutes.

Upon arrival, officers observed the southwest side of the 2-story apartment building completely engulfed in flames. The officers reported thick black smoke in the entrance hallway to building and worked to evacuate residents. An officer had to force entry to one of the ground floor apartments because the residents were sleeping and unaware of the emergency.

Two other residents in an upstairs apartment were unable to get out their apartment door because of flames in the hallway. The officers backed one of the department’s SUV-style squad cars up to the building and assisted the residents in escaping the building through their 2-story window onto the roof of the squad. The residents were conveyed to Waukesha Memorial Hospital to be treated for smoke inhalation.

The City of Pewaukee Fire Department evacuated the remaining residents on the east side of the building. The American Red Cross responded to assist the displaced residents.

Officials with the fire department requested assistance from 13 surrounding departments to battle the 2 alarm fire. The fire was fully extinguished shortly after 2:00am. Smoke detectors were installed and properly functioning throughout the building. The cause of the fire is still under investigation and not considered at this time to be suspicious.

The smoke detectors were working and there was a lot of smoke on the second floor at the time.
Share this article: