Recycling collaboration between City of Milwaukee and Waukesha County 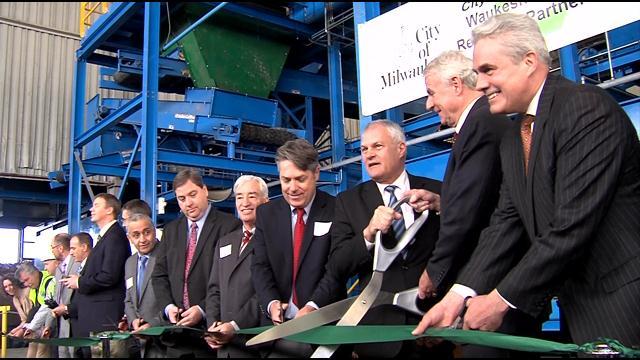 In a day and age when politicians are viewed as trashing each other, the City of Milwaukee and Waukesha County Board are working together to save taxpayers money and clean up the environment.

On Tuesday, they cut the ribbon on a new Materials Recovery Facility or MRF in the Menomonee Valley.

Before paper and containers were separated by residents and processed at independent facilities.

Now, paper and containers are mixed together and the collection and processing is highly automated and under one roof.

\"Right now we're saving  $4 million with single streaming and that savings will go back to the taxpayer,\" declared Waukesha County Board Chair Paul Decker.

Recycling has become all the more critical to the bottom line with landfill tipping fees continually climbing.

But several Alderman say it's also a moral obligation.

\"It allows us to take advantage of our consumption economy to move to a zero waste stream which I know is a goal of the City of Milwaukee,\" said Milwaukee Alderman Bob Bauman.

According to Waukesha County officials, since the early 1990s, both Waukesha County and the City of Milwaukee owned their own separate materials recovery facility (MRF).

By the late 2000s, the processing equipment in both MRFs was reaching the end of their expected life. Based on studies conducted by both communities and a joint request for proposal process completed in 2013, it was agreed that a joint City/County single-sort automated processing system for recyclables was the most efficient and economically feasible plan moving forward.

In 2014, the City and County executed an intergovernmental agreement and contracts with ReCommunity, a private company, to design, build and operate the Joint MRF.

Waukesha County coordinates with 25 of its communities to collect and process recyclables leading to tax savings for residents.