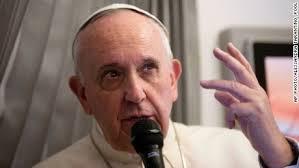 A recent poll from Quinnipiac University released this past September 3rd, suggests that Pope Francis' popularity has increased in the last year.

His popularity was voted at a 66 percent as either “very favorable” or “favorable”. The survey also suggests it might be because of the manner in which he connects with people.

He was the first Pope with a twitter account and the first one to take selfies with his followers.

“I think it's really cool that he is doing that honestly, because I’ve never seen that before and a way of him to reach out and to make it seem like he's also human,” says Brenda Andrade a catholic parishioner.

Others say it's not just only his manner in which he connects using modern technology but the way he connects personally with people all over the world.

“Last Friday night he did an interview from room but on television with people in Los Angeles, and these are people on the streets the homeless,” says Father Bill Johnson, a Jesuit priest.

Just about a week ago Pope Francis announced he would be allowing priest to absolve women who have had an abortion.

“I think we should be clear there's not a new stance abortion, he is against abortion but people that have had abortions woman and families you know he's in favor of reconciliation,” says Johnson.

Also according to the new poll of, 43 percent of non- categorized Catholics believe the church is moving in the right direction.

Not everyone feels as positively about the pope, according to an article published on USA Today not all at the Vatican support the pope. One cardinal even said in quote “The Roman Catholic Church is a ship without a rudder and the faithful are feeling a bit seasick\".