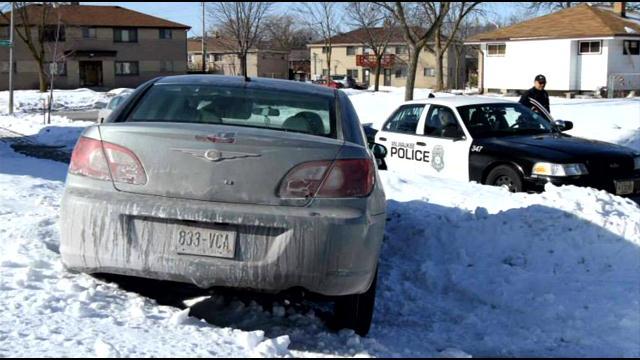 Yet another driver warming up their car has become a victim of auto theft.

It happened near Acacia and Landers in Milwaukee Tuesday morning.

Two hours later Milwaukee Police District 4 Officers found the car on a sidewalk one mile away in the 8200 block of W. Winfield Ave.

The driver lost control on a curve, slid passed some garbage cans, ultimately stopping on the sidewalk. The car was wedged in a snow bank with some damage to the front end.

When officers found the car, it was still running with the passenger door wide open.

MPD said that there were at least fifteen vehicles with the keys in the ignition stolen on Monday.

The District 7 office of MPD reported that over the weekend fourteen of fifteen stolen autos were left running unattended.

Police said that with more bone-chilling temperatures coming, they continues to remind drivers to not leave their vehicle running unattended.

Not only is it illegal, MPD has continued to see these types of auto thefts increase.

After warning people since January, District 2 will being issuing $22 citations to try and cut down on the cars left idling.

If that strategy works, other departments will likely do the same.

MPD said they hadn't been issuing the citations before because they wanted to maintain the good relationships they developed in the community, but added that it's needed now.

LOCK THE DOORS. Use a second key to be able to lock the car after starting it.

GET A REMOTE STARTER. Remote starters are the safest, and only legal way to keep your car running while unattended. With the key out of the ignition, a thief can't put the car in gear.

STAY WITH THE CAR. It's better to be cold for a few minutes in your car while it warms up than to be left in the cold when a thief drives it away.