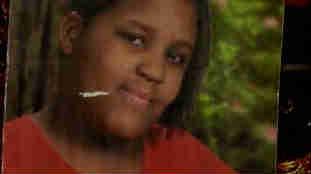 The Racine Police Department is investigating the shooting of a 15-year-old girl as an attempted homicide.

Authorities said the teen suffered a gunshot wound to the face Tuesday night, while standing outside her aunt's home in the 1400 block of West Street in Racine.

The family tells CBS 58 doctors are set to remove the bullet from the victim's cheek Wednesday. She is expected to be okay.

Mary Williams, the victim's aunt, said it all happened when her niece and others inside the house heard arguing out front and went outside to see what was going on.

Williams was on her way out the door to tell those causing trouble to leave, when shots rang out. She said everyone ran back into the home and that's when the teen fell into someone else's arms.

Janikka Marsh knows that heartache all to well.

Her now 5-year-old daughter, Ja'Nyela, was shot in the head late last year in Racine. Ja'Nyela now is back in school, but must still have surgery to repair her skull.

No arrests have been made Marsh's daughter's case. She has this advice for the family of this latest tragedy.

\"I would tell the family just pray for guidance and let God deal with the person, if the person is caught and not to put a lot of stress or thought into that person,\" Marsh said. \"More so think about the healing and what the daughter needs, teenager may need, because there's nothing we can do to these people. We just have to deal with it.\"

Racine police have made no arrests in the attempted homicide of the 15-year-old.