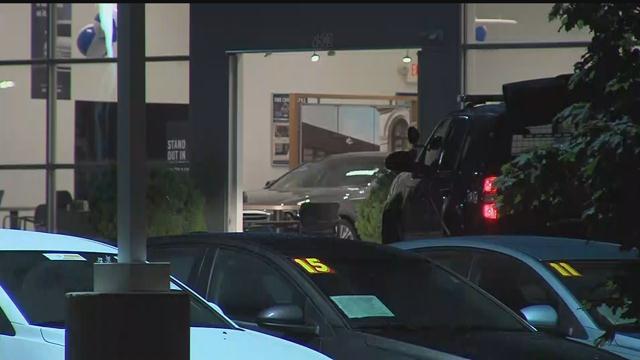 A glass garage door was broken around 3:30 this morning at a dealership in Racine.

Someone threw a brick and drove two cars out of the showroom.

The Hyundai is the 4th break in in 9 days along highway 20 here in Racine county.

All have done the same thing. Break the glass in the showroom and drive away.

Because of these break ins, Racine Hyundai, and their partner dealership , Racine Honda have tried to make stealing cars tougher for thieves.

Turns out the high speed chase means police are one step closer to stopping these break- ins.

Police in Mount Pleasant say they've been stepping up patrols.

They didn't have a license plate.

"One of our marked cars noticed too dark color cars racing west on highway 20 and he gave chase with lights and siren west on highway 22 I 94 where he was joined by the sheriff’s office and the Wisconsin State patrol,” said Capt. Tom Petersen, Mount Pleasant Police.

The officer wasn't on normal patrol. He was keeping an eye on the car dealerships along highway 20.

"There was no alarm call in this situation it was the extra patrol officer that we had on duty at the time for whatever the reasons are the ones that burglarized the Hyundai dealership chose to race the vehicle side-by-side,” said Capt. Tom Petersen, Mount Pleasant Police.

Racine Hyundai says they feel confident the police will solve these crimes and until these thieves are caught, warn other dealers.

"In a car dealership there's always keys obviously both the thieves know that but I would always just make it tougher for them to do what they're doing,” said Eric Greskoviak, general manager Racine Honda.

Police say they will keep an eye on these dealerships.

Hoping to stop break ins before they happen.

They're also still investigating every break in.

Even have a thirteen year old in custody from the July 4 break in at Porcaro Ford.