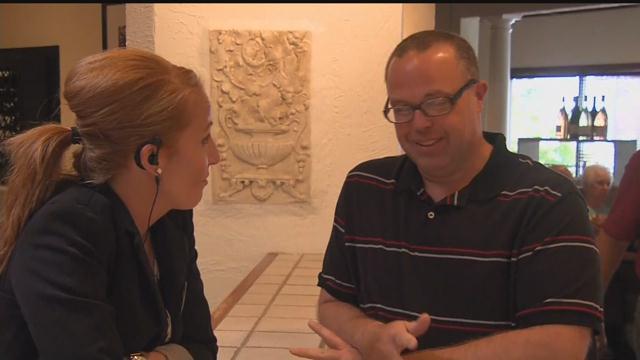 The quiet before the dinner rush Sunday at the Racine Olive Garden was  shattered  as a server named Jackie lay dying on the kitchen floor.

Horrified co-workers, including the server's  own sister, huddled around trying to give her comfort.

\"And I felt her hand go limp,\" said Glass. \"I said it looks like the seizure stopped. Her sister said I think it's because she stopped breathing.\"

911 dispatchers immediately instructed them to conduct CPR. Nobody felt confident. So, Folk ran into the dining room and for reasons that she still doesn't understand, she went immediately to a man she had seated just two minutes earlier.

\"It's just so weird because I passed up a couple of tables to go to the table I went to,\" Folk remembered.  \"He just jumped right up ran back to the kitchen no hesitation.\"

Paramedics soon arrived. But witnesses have no doubt the customer saved their beloved co-worker and friend.

\"She's just such a sweet girl,\" said Glass. \"If he hadn't been there I don't know what would have happened.\" The restaurant picked up his tab. But in the commotion nobody got the man's name.

With Jamie on the road to recovery, Kristina took to the Racine Uncovered Facebook page to say thank you.

\"He was so humble. I just wanted him to be acknowledged.\"

That resulted with some exchanges back and forth with the customer and on Tuesday night, the man reluctantly agreed to return to the scene of his heroics and talk with CBS 58 News.

\"I don't want to say it's embarrassing. It's just one of those things you don't fully think about. I went in there and I did what I was trained to do.\"

Brian Wenzel works in the corrections division of the Milwaukee County Sheriff's Office where CPR training is required and where, apparently, taking action is second nature.

Wenzel may have done more than save one life that day and actually resuscitated people's faith in each other.