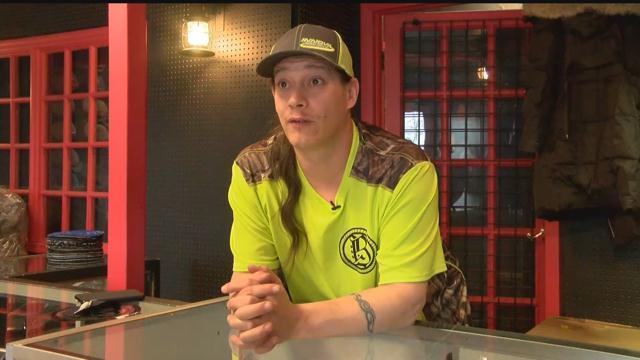 It's another kind of golf that saved one Racine man. He traded his drug addiction for a love of disc golf and he's opening a store, hoping to give back to the community who supported him during what he calls his 'dark time.'

Brandon Theriault has been working on this store for more than a year, saying this isn't about the money; its about growing a community and changing peoples lives here in Racine.

"Racine was a very tough place to grow up for for me," said Brandon Theriault.

Since childhood, Theriault has struggled.

"There wasn't much to do, I got involved in the streets. Ran the streets for a while," he said.

But old habits die hard. As an adult who fell on hard times, Brandon says he got addicted to cocaine and was in a dark place.

"I woke up one day and I didn't like who I was, I couldn't look at myself in the mirror," he said.

His friends saw it too. And in a less than traditional method of rehab, they took him to a park in Indiana, left him there with water, food and the game of disc golf.

"It changed my entire life. After four days they came back and I asked them to bring me more food and water. I stayed living in that park for two weeks. When I came out of that park I was a different man. I had found purpose in my life," he said.

Coming back to Racine to start his own store. and share disc golf with others.

Brandon says he recognizes the power that even just one disc has. And now that hes got his own store he's got a whole wall full of them and  plans to use them to better Racine.

"It's a sense of family, a sense of purpose and some people don't have that family. We try to bring that to the table," said Brandon.

With no parks currently in Racine County Brandon says there are still hundreds of people in this local disc golf family and he sees lives transformed every day.

He has spoken with officials from Caledonia and Mount Pleasant and says things are looking promising for courses there.

The store is currently in a soft-open mode; with a grand opening sometime this spring. However, you're still welcome to stop in. It's located at 1202 N. Main Street and this is a link to their Facebook page: https://www.facebook.com/Plan-B-Disc-Golf-Depot-1413691378960215/