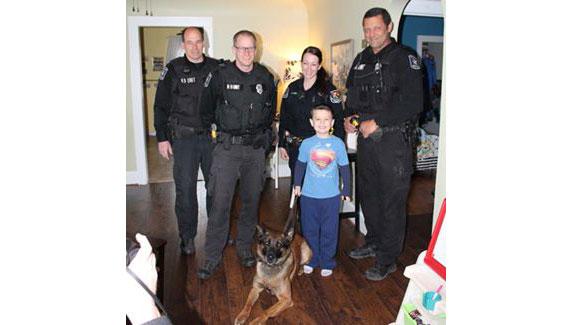 The Racine Police K-9 Unit made a special visit on Thursday to Daxton, a 5-year-old diagnosed with pre-b-ALL Leukemia.

The K-9 Unit originally met Daxton in October when the team was selling calendars for a fundraiser.

According to Racine Police, the unit was contacted by Daxton’s mother. His mother requested that one of K-9 Units personally deliver Daxton's calendar to him.

On October 15, K-9 Titan and his handler made a special trip over to deliver the calendar and take a photo with Daxton. Titan, also, visited Daxton's classroom.

On March 15, the Racine Police’s K-9 Unit received a message from one of Daxton's family members that on March 10 Daxton was diagnosed with Leukemia.

He recently received his first dose of chemo and was released from Children's hospital on March 14. Racine Police, and Mount Pleasant Police Department K-9 Units made a special trip over to Daxton's house where he was presented with several gifts from the K9 Teams and the Chief of Police.

“The looks on his face are priceless,” said the Racine Police Department on their Facebook page about the photos taken at the event.