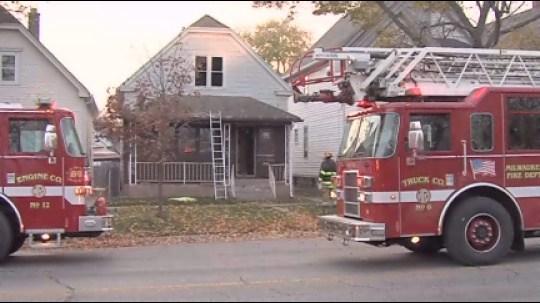 A pregnant mother on Milwaukee's southside is grateful to a family member and neighbor for leading them to safety after being trapped with her kids on the second floor a burning home Thursday.

\"I was sleeping and I heard someone screaming and I was like 'what's going on?' \" Judith Delgado said.

The panicked screams were coming from her mother and father who were on the first floor. Delgado's mother woke up to flames in the house in the 2800 block of S. 16th Street just before 7 a.m.

\"She just tried to walk that way to the kitchen and see what's going on and she saw fire,\" Delgado said.

The kitchen area is also where the stairs are. The stairwell was filled with black smoke, making it nearly impossible for Delgado and her son to escape.

She decided they had one option, head to the front window. Her 14-year-old son was able to jump down from the roof. But Judith -- with her unborn baby - and 9-year-old son were stuck.

\"There was a lot of smoke coming out of the window and I was scared because we didn't know if the fire was right behind us. I'm pregnant so to jump for me, I got to take care of my baby that's inside.\"

\"My dad was knocking the windows here and over there.\"

Finally, a neighbor woke up and brought a ladder over.

\"He thinks quick and saw the smoke and oh my gosh, he was screaming and all that and he helped us with the ladder. I really be thankful, I am thankful for him.\"

The Milwaukee Fire Department says the fire doesn't appear to be suspicious.