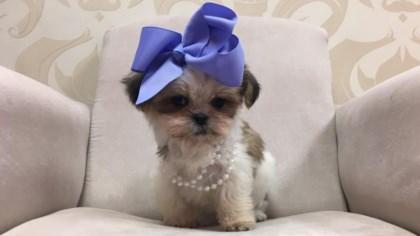 (CBS CHICAGO) — The spirit of the season has been dimmed for the owner of a Joliet pet shop specializing in high-end, purebred puppies.

One of their dogs was stolen the night before Thanksgiving.

It was a busy evening at the Furry Babies puppy store at the Louis Joliet Mall — and the perfect cover for a dispiriting crime.

“In a time when we’re all talking about what we’re grateful and thankful for, it’s even more disheartening,” Ana Sockic says.

Store surveillance footage shows a man in a knit cap looking around before he reaches into a crib and picks up a puppy. He turns to a woman, while both apparently pet the dog.

“Then he put her under his coat, and he walked out,” Soskic says.

The worry now is that the fragile pup could be mistreated due to cruelty or ignorance.

“We plan on prosecuting, regardless if the puppy’s returned safe, because this is not acceptable,” Soskic says.

Joliet police confirm the theft was reported. They plan to review the surveillance video to determine just how much help it may provide in the investigation.