Pumpkin the raccoon is just your average dog 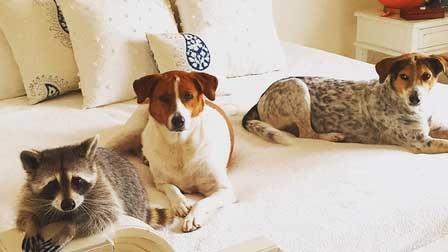 One year ago this month, a baby raccoon practically fell into the laps of the Young family.

At only 1 month old, the raccoon slipped from a tree and into Rosie Kemp's backyard.

Kemp and her daughter, Laura Young, hoped the injured creature's mother would return to her.

After hours of waiting, it was obvious she wasn't coming back.

Since the Bahamas Humane Society was unable to care for the raccoon, Young and her husband, William, volunteered; it's legal for families to own for raccoons in the Bahamas, as long as they are up to date with vaccinations.

"They were unable to take in an orphaned raccoon," Young told CBS News. "So, with the guidance of friends who have had experience with raccoons -- we cared for her."

The baby raccoon, who the family named "Pumpkin," spent about a month recovering from a broken hind leg.

The Youngs adore Pumpkin -- and they aren't the only ones.

Their two rescue dogs, Toffee and Oreo, also formed what Young describes as a "beautiful" relationship with Pumpkin.

"Pumpkin considers the dogs her mums," Young explained. "She respects them when they have had enough rough play and she loves to cuddle next to them when she is tired."

With nearly 80,000 followers on Instagram, Pumpkin is considered a social media celebrity.

Photos of Pumpkin and Oreo taking naps together, playing in the yard and relaxing on the couch on a hot afternoon garner thousands of "likes" every day.

"She is so wonderful and highly intelligent and always very entertaining," said Young, describing the raccoon's active presence on social media. "She is a cheeky little thing, but we love her dearly."

Ordinarily, Young said she wouldn't consider having a raccoon as a pet. But since Pumpkin didn't get the chance to live in the wild, the family is going to make sure she has the best life possible.

From diving into swimming pools to climbing on the kitchen counter to grab a cup of coffee, it looks like she's already having a great time.