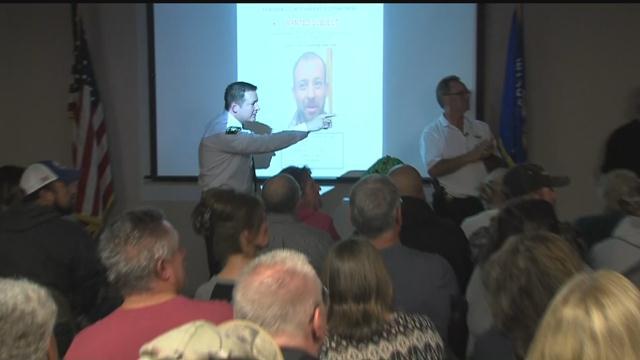 For some it's fully loaded guns, for others much tamer methods.

"I did take a can of wasp and hornet with me."

"You don't know, I mean this guy could pop up from anywhere," Strempler said.

For two weeks now, Obregon has used miles of cornfields and the backyards of neighbors as his hiding place. One woman saying her friend has stopped daily walks, shutting herself indoors.

Racine County Sheriff Christopher Schmaling and Kenosha County Sheriff David Beth tried to calm the fears of residents saying Obregon was not typically violent and that the murder he's wanted for questioning, is likely isolated.

"If you're afraid of sleeping in your house. I could just about guarantee, don't. This is not what he is about," Sheriff Beth said.

Some questioned their right to shoot Obregon on sight. A farmer asked, "If I run across somebody in one of my barns or my shed, obviously I'm out here with a firearm when I'm doing my checks in the mornings and the evenings, do I have a right?"

The sheriff warned residents to be calm and let police handle it.

"I know out here, a lot of folks like to keep a loaded shot gun in the corner, I'm okay with that, just remember when you call 911 first, the Calvary is coming, and the person you might be aiming at might be me running through your yard," Sheriff Schmaling said.

Obregon has not been seen in several days. Investigators believe he is still in the area. They say they have more fear of him hurting someone in a high speed chase than a violent situation.