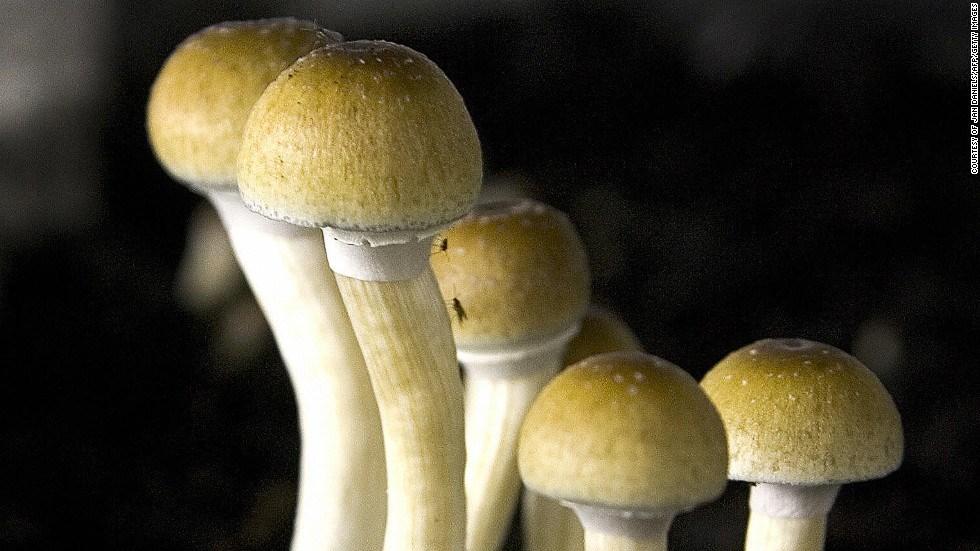 (CNN) Patrick Mettes was overcome with frustration. He was anxious.

His bile duct cancer seemed to bring him more anguish than his wife, Lisa Callaghan, ever realized, she said at a news conference Wednesday.

In search of solace, Mettes volunteered for a study in which he was given a synthetic version of psilocybin, a compound found in mind-altering "magic mushrooms," as a potential treatment for his anxiety and depressed mood.

During the study, Mettes' psychedelic trip was akin to "a space shuttle launch that begins with the clunky trappings of Earth, then gives way to the weightlessness and majesty of space," Callaghan said, recalling what Mettes wrote in a journal entry.

"I believe it helped him, and both of us, live life fully up to the very end," she said.

Mettes later suffered a massive heart attack. He survived but decided to stop chemotherapy. The Brooklyn, New York-based television news director, whose portfolio included CNN's "American Morning," died at the age of 56 in 2012.

Callaghan believes the psilocybin helped Mettes overcome his fear of death, she said.

"He was not afraid of death, and in fact, he seemed to grow through the process of dying," she said of her late husband. "My brother was with us quite a bit during that time and says that he felt that Patrick's spirit grew as his body declined."

Other cancer patients who participated in the study, which was led by researchers at NYU Langone Medical Center, reported similar experiences and described psilocybin as beneficial in easing anxiety and depression. Similar findings also were found in a separate study conducted at Johns Hopkins University.

Both studies, accompanied by 10 commentaries and an editorial, were published in the Journal of Psychopharmacology on Thursday.

They shed new light on psilocybin as a possible anti-anxiety and antidepressant therapy in patients with cancer, a disease that is diagnosed in more than 1 million people in the United States each year.

'It was kind of magic'

Fifty-one patients with a potentially life-threatening cancer diagnosis volunteered to participate in the Johns Hopkins study. All of them also had a diagnosis of anxiety, mixed anxiety and depressed mood, dysthymic disorder, generalized anxiety disorder, major depressive disorder or a dual diagnosis.

The patients were randomly given either a high or very low, placebo-like dose of psilocybin. Then they were given the opposite dose about five weeks later.

The patients were administered the psilocybin while in a living room-like environment, and they were closely monitored. No serious adverse reactions, such as hospitalization or mental health conditions, occurred.

The researchers found that the high-dose psilocybin resulted in significant decreases in both clinician-rated and self-reported measures of depressed mood and anxiety among the patients. The effects lasted in 78% of patients for depression and 83% for anxiety in a follow-up assessment six months later.

"These effects appear to be sustained in our study at least six or seven weeks and very plausibly more than six months," Roland Griffiths, a professor of psychiatry and neuroscience at Johns Hopkins Medicine and lead author of the study, said at the news conference.

He added, "it's a very exciting opportunity to consider entirely new approaches to therapy."

Sherry Marcy, a resident of Ann Arbor, Michigan, was diagnosed with metastatic endometrial cancer in 2010 and went through a spectrum of surgery, radiation and chemotherapy before deciding to participate in the Johns Hopkins study.

"I was very depressed," Marcy said. "I was taking antidepressants. They had side effects and didn't really help, so I stopped."

When Marcy was administered a single dose of psilocybin during the study, she said, "it was kind of magic."

Marcy said she has since reconnected with family and friends, and re-engaged in activities she used to enjoy, such as singing, reading and doing tai chi.

The nine-month study conducted at NYU Langone Medical Center involved 29 patients with cancer-related anxiety and depression. Half the participants were given either a single dose of psilocybin or a vitamin placebo called niacin. Seven weeks later, they were given the opposite.

Neither the patients nor the researchers knew who had first received psilocybin or the placebo.

By the end of the study, "we found that psilocybin was a rapid, immediately acting anti-anxiety and antidepressant," said the study's lead author, Dr. Stephen Ross, director of substance abuse services and associate professor in the Department of Psychiatry at NYU Langone, at the news conference.

Among the patients who were given psilocybin first, 83% still experienced an antidepressant response seven weeks later, compared with 14% who were given the niacin, the researchers found. There were no adverse effects, they said, outside of headaches or migraines, nausea, and transient anxiety or discomfort.

By 6½ months, after all patients had received psilocybin, about 60% to 80% continued to experience antidepressant or anti-anxiety benefits.

"We're definitely not concluding that one dose cures people forever. It's surprising that it works so long, but unlikely that it works a lifetime," Ross said.

He said psilocybin might have effects that last many months because our brains have a level of neuroplasticity, the ability to adapt and change with various experiences.

"Likely when symptoms come back, we're going to need models of how to redose and re-treat," he said.

The history of psilocybin and where it's headed

The two landmark studies suggest psilocybin might be just as, or possibly more, effective as existing pharmaceutical treatments for anxiety and depression.

They represent the most rigorous research to date that has involved psilocybin, according to an editorial that accompanied the two studies in the Journal of Psychopharmacology.

Yet, "to many people brought up in the Reagan drug war era with the 'drugs fry your brain' message, psilocybin may seem a strange and possibly even a dangerous drug treatment of serious mental illness," wrote David Nutt, professor of neuropsychopharmacology and director of the neuropsychopharmacology unit in the Division of Brain Sciences at Imperial College London, in the editorial.

Psilocybin was made illegal in the United States in 1968. It's classified as a Schedule I drug under the Controlled Substances Act, which means it has not been accepted for medical use and has a high potential for abuse.

"There was no evidence of psilocybin being harmful enough to be controlled when it was banned," Nutt wrote. "In a number of countries, it has remained legal, for example in Mexico, where all plant products are legal, and in Holland, where the underground bodies of the mushrooms, so-called truffles, were exempted from control."

The new studies, however, suggest that psilocybin be used only in a medical setting, said Dr. George Greer, co-founder, medical director and secretary at the Heffter Research Institute in Santa Fe, New Mexico, which funded both studies.

"Our focus is scientific, and we're focused on medical use by medical doctors," Greer said at the news conference. "This is a special type of treatment, a special type of medicine. Its use can be highly controlled in clinics with specially trained people."

He added that he doubts the drug would ever be distributed to patients to take home.

Greer said patients should be screened for a personal or family history of psychosis or manic episodes, as they could suffer negative effects.

Scientists have long explored using psychedelic drugs, such as psilocybin and LSD, as possible therapies for anxiety associated with terminal illnesses, but since the late 1960s, it has been extremely difficult to study the therapeutic potential of such psychedelics, said Hattie Wells, operations manager for the Beckley Foundation, an Oxford-based drug research think tank.

"Legal restrictions resulting from the current scheduling of psilocybin as a Schedule I drug (maximum potential for harm and no medical use) in both the US and UK means that the cost of research is tenfold over 'legal' drugs," wrote Wells, who was not involved in either study, in an email.

"There are a multitude of bureaucratic difficulties resulting from this scheduling," she said. "In order to take this research to the next level we need phase 3 clinical trials, multicentered trials with thousands of diverse participants from all walks of life. If these showed similar success rates, we would hope to get (the UK's Medicines and Healthcare products Regulatory Agency) and FDA approval of psilocybin and other psychedelics, which would lead to the rescheduling of these substances and their incorporation within mainstream psychiatry."

Similar to the two new studies, for instance, a small study published in the journal JAMA Psychiatry in 2011 demonstrated that the controlled use of psilocybin could provide an alternative model for the treatment of anxiety and depression in advanced-stage cancer patients.

He wrote that cancer patients have a higher prevalence of anxiety and depression, at least 30%, compared with about 7% in the general population. Additionally, cancer patients who suffer from anxiety or depression often experience worse outcomes in their illness, from worse pain to decreased survival, he wrote.

"These studies certainly warrant further investigation, and as we heard, planning for a phase 3 study would be the next step," Blinderman said at the news conference.

"Certainly, if the results of a phase 3 study show similar outcomes with this kind of impact, then we should really consider this as a potential therapy for cancer patients and potentially others, which would of course require the changing of psilocybin from being a Schedule I drug to a Schedule II, given that it has medical benefits," he said.

Blinderman noted in the commentary that shamans and spiritual healers throughout human history have used entheogens -- chemical substances found in plants, such as psilocybin -- in religious or spiritual healing ceremonies.

"A return to entheogens for the treatment of psycho-existential suffering may signal that medicine has come full circle to embrace the earliest known approach to healing our deepest of human agonies," he wrote.