MILWAUKEE (CBS 58) -- Unrest continued for the third night on Sunday, May 31 in Milwaukee.

Businesses were looted near Teutonia and Florist.

More area businesses looted overnight in Milwaukee. This was the scene at the North Bay Shopping Mall on Teutonia and Florist. @CBS58pic.twitter.com/FPZcf9k8Nq

Smashed in doors and a motorcycle set on fire at Milwaukee @harleydavidson just off of Lovers Lane in Milwaukee overnight. MPD is on scene. @CBS58 pic.twitter.com/2uciCE0wxr

Unrest also continued near 3rd and Center. Burned debris could be seen in the middle of the street. 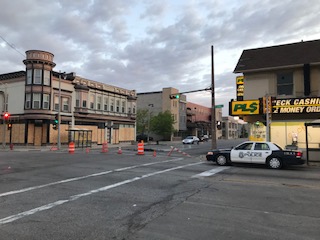 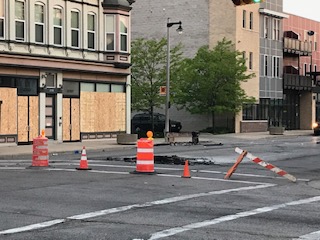 MILWAUKEE (CBS 58) -- Protesters marched the streets of Milwaukee Sunday afternoon, May 31, in support of George Floyd.

Sunday’s protests started off a bit different, with a prayer and song near Locust and Dr. Martin Luther King Drive.

And about two miles away… a separate group who put down the signs to pick up trash.

“Signs are just not helping anymore. Cleaning up with my neighbors at least starts to spark some positivity," Bay View resident Katie Robleski said.

And all of their actions, a stark contrast, from the nights before – where chaos took over. But community organizers say their message is peace.

A brief confrontation happened between police and protesters near I-43 and North Ave.

One man ran down the freeway ramp, and was detained.

Some protesters called for his release, and stayed until he was freed.

Eventually, the group continued to march.

“I think this is a demonstration of the fact that when we have a united and common vision for the community that we want to see, which includes being safe and healthy, this is what unity looks like," said Reggie Moore, director of the City of Milwaukee Office of Violence Prevention.

Carrying signs and chanting "George Floyd," "No Justice, No Peace," and "our streets," hundreds marched and honked from their vehicles for hours throughout downtown.

Mayor Barrett issued another 9 p.m. curfew for the city Sunday night. This, as peaceful protests during the day have turned into opportunity for groups of criminals to strike at night. Over the weekend, a Milwaukee police officer was shot, dozens of businesses looted and more than 60 people arrested.