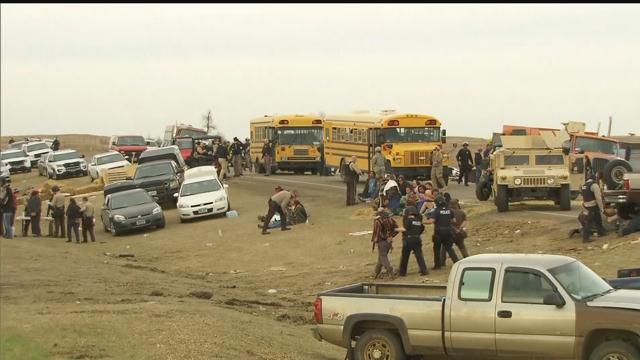 A controversial pipeline running through the heart of tribal lands provoked protest in North Dakota on Thursday.

The protest quickly turned violent and police arrested 141 people including one woman they say opened fire on officers.

Protestors lit a bonfire on a bridge. Those who challenged police were arrested.

Native Americans are angry about plans to tunnel the pipeline under the Missouri River. A leak would damage what they consider a tribal lifeline and pollute water for millions of Americans downstream.

The roughly 12-hundred mile pipeline will carry crude oil from the Bakken Oil Field to Illinois.

"We cannot allow our state highways and our county highways to be taken over by agitators from other areas of the country," says the governor.

Native Americans and environmentalist are determined to stop the pipeline, but the state's government seems just as determined it will be built.