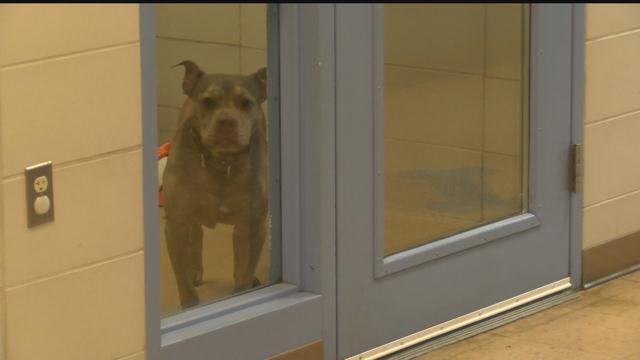 It doesn't take much to see a shelter dog light up

"You can see the glimmer in their eye so to speak, they're so excited," Humane Society volunteer Kristine Coseelow said.

Wisconsin's Humane Society says they want to see more dogs and cats happy in new homes. But, an old state law keeps them in the shelter for a full week before they can adopt out.

"Wisconsin has one of the longest stray holds in the country; on average other states tend to be 3-5 days," VP of Community Impact Jill Kline said.

Keeping animals in the shelter for 7-9 days ups the chances for them to get upper respiratory diseases, internal parasites, and depression. Proposed Bill LRB 1926 will cut the wait down to 4 days. It'll also give dogs caught in fighting rings another chance. Before, dogs age one and older were automatically euthanized. Now, they'll be evaluated.

"It's not penalizing a dog just because of the history, it will truly be based on behavior.” Kline said.

It'll also let shelters advocate for seized dogs tied up in court cases. Some animals have been held in shelters for years, waiting for a conclusion, leaving them worse off than before.

"They're very social people so they want to be around people and be active, but they can't really do that  when they're cooped up for so long and it's hard," Coseelow said.

Opponents of the bill say animals could be adopted out before owners find them. The bill is sponsored by representative John Spiros, but still needs co-sponsors.